How To: Coach Yourself Through a 15 Mile Run 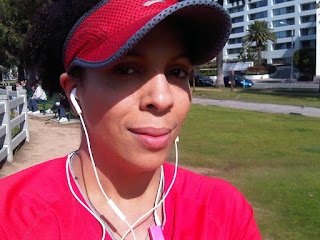 I put in 15.2 miles of hard-won running yesterday morning.

With only a month till the Los Angeles Marathon, the countdown to race day is ON...and I'm playing catch up. Last month my doctor BANNED me from all forms of exercise because of my "You're Having a Heart Attack, Heffa" symptoms. Except, it wasn't a heart attack—so far tests reveal a big nada in that department. I'm supposed to go see some other cardiologist but, meh, I feel pretty good and, well, I like race medals.

Of course, the problem with there only being a month till race day is that I've only run TWICE since the second week of January—and both of those runs happened this past week. Needless to say, I've been wracked with anxiety over my dwindling race prep.

My pace group's plan for yesterday was 20 miles—I'm a consummate vain overachiever but even I figured I couldn't do 20 miles right out the gate. Heck, I didn't know if I could do five miles. AND, my club doesn't run in a loop —we do an out and back strategy so if I run one mile, that means the round trip distance back to my car will be two miles total.

Mile One: Look, girlfriend. You know you can run one mile because you ran four on Thursday. Besides, you ALWAYS hate the first mile so get.it.together! Hmm...that guy coming this way is a classic case for why men should always wear athletic supporters when they're running. Yes, that's the way to go, distract yourself by observing guys without, ahem, athletic supporters.

Mile Three: OK, starting to feel better, even though this uphill SUCKS. Maybe I should turn around. But if I do that, that means I'll only run six miles total. That's not good enough. Should I just walk? Should I just slow my pace down? Yes, slow the pace down by 30 seconds. Who cares if everybody else in the pace group gets a little ahead?

Mile Four: If I turn around, that means I'll have eight miles total. Hmm...Oh wait, there's the support station for my running club, the Los Angeles Leggers! Yay, time for orange slices and a pep talk from a running veteran: "This is NOT the marathon. This is just a training run, so do what you need to do but don't push it too much."

Mile Five: You got this. You can do 10 miles. One foot in front of another. That's right...running is like dancing and you LOVE to dance. Let's take it back to Chicago...

Yeah, let's listen to that again, because when you cross the marathon finish line, it's SO gonna be, "Cameras ready, prepare to flash!"

Mile 6-10: Take it easy on the downhills. There's no reason to go full out on a training run. Just keep it going...especially since you have no choice since you have to run back to where your car is! And yeah, go on and sing out loud if you feel like it. Who cares if your voice horrifies these nice rich people living on San Vicente!


Mile 10: I know this %#^@% did NOT just almost hit me with her car while I'm crossing the street in a crosswalk with a walk sign flashing! Adrenaline rush! Then again, if she'd hit me, I'd be RICH. Or dead. Yeah, dead is bad.

Mile 11: Yay, back to the start! Hmm...the rest of my pace group is running south through Santa Monica into Venice and then back again. Maybe I can do one more mile south. Roundtrip back that'll give me 13 miles. That's a half marathon. I can deal with that distance psychologically. This game is 50 percent mental. Focus on those waves crashing against the shore!

Mile 12: Let's see if I can make it all the way to Venice to the next support station for my club...then I can turn around there and that will mean I'll have 14 miles. I can do this. Look at that little old lady hobbling along with her cane! If she can move, my ass can move too. Who cares if I take a 30 second walk break every couple of minutes? I sure don't. Get those miles in!

Mile 13: I feel pretty good, but continuing would be overdoing it. I'm ambitious and crazy, but not THAT crazy. I'm two miles away from my car. Turn around and call it a wrap. There is NO shame in 15 miles. Aches, yes, but that's what sports massage and ice baths are for. In the meantime, keep it going with...


Mile 15.2: Finished! I snapped my photo—I think I look a lil tired and a bit like, what in the heck did you just do to yourself? Then I made a beeline for the awesome sports massage volunteers from Paulseth Physical Therapy!

After I came home, I took TWO ice baths and mostly chilled out. I know, my thought process—and the fact that I even got out there and ran that far—probably sounds insane. And, I'll be the first to admit that I'm NOT good at acknowledging when I need to stop/quit/put the brakes on an endeavor. But, I've been thinking about how influential the stories are that we tell ourselves about what we can (or can't) do. I realized that one of the best things I've learned from running is how to psychologically coach myself through difficult situations so that I can achieve my goals. Oh, and having a playlist of music I love is a good thing!

Liz Dwyer said…
Jameil,
I'll feel even more awesome in a month when the race is OVER!