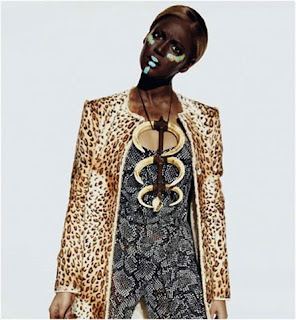 One of the most famous singers in the world, Beyonce, is trying out some fashionable blackface for the 90th anniversary issue of French magazine, L'Officiel. Bey garnered the cover and also stars as African queens through history via a photo tribute to Nigerian artist and human rights activist Fela Kuti.

On the one hand, what a shock to see a black celebrity that isn't retouched or lit to look lighter. They even darkened up her signature blond weave a little bit.

On the other hand,this smacks of some hipster, art school madness where a bunch of people are sitting around smoking and someone says, "Wouldn't it be soooo Queen of Africa to paint Beyonce's face a dark brown and throw a leopard print jacket over a snakeskin body suit?" Then someone else says, "Don't forget to add some bone necklaces—because nothing screams AFRICA like animal prints and bones!" And scene.

Never mind that if they wanted to do a real tribute to Fela Kuti, they could've gone in a million different directions. I mean, what do a bunch of African queens over the ages have to do with Fela Kuti? Blank stare. It's like in their heads they did what so many of us are guilty of—they mashed all Africans together into one monolithic image and experience.

What if they'd picked actual African models from across the continent to be the various queens, or just picked Nigerian models and dressed them up in some fly afrobeat-style outfits? Or even dressed Beyonce up in the style of Fela's dancers?

It also bothers me that Beyonce is playing dress up as a darker skinned black woman. At the end of the day, the dark makeup washes off and she goes home, with all the light skinned privilege she has at her disposal still intact.

And, why can't the woman celebrate her African heritage in the skin color she was born with? If they want to depict her as various African queens, is changing her skin color really necessary?

Because L'Officiel is a French magazine, we're all supposed to believe this is art and it's not a big deal because French people don't think about race in the same way American's do. I call b.s. on that.

TV, movies, music and pop culture export American attitudes about race, Africa and black Americans all over the world. And, the French themselves are not magically free of racist attitudes toward black people, whether they're from Africa or America. Just ask African immigrants living in France about their magical, racism-free existence and see how long and hard they laugh.
Email Post
Labels: Africa african american African immigrants Beyonce Black people blackface fashion Fela Kuti French hipsters models racism

Jameil said…
Beyonce fail. I'm guessing another justification: it's not offensive if a BLACK person does it. Just like the n-word, right?
11:38 AM, February 23, 2011

Liz Dwyer said…
Jameil,
Exactly. They'll say that if it's so offensive, why would Beyonce, a black woman, agree to do it? Pfft, for the same reasons Tupac ditched conscious rap--doing the wrong thing tends to pay.
8:20 PM, February 23, 2011

Rosita said…
Your exactly right on about France, especially their attitude about Africans. There is an incredible (not quite the word I am looking for, but it will do) difference between the way they treat Africans and the way they treat African Americans whom they consider to be Americans. It is for that reason I am not at all surprised that they found an African American to do the photo shot instead of an African.

Tracy said…
I'm so sick of this woman. Why is this ditz THE BLACK WOMAN in entertainment? I know the machine will only allow one black woman at a time to reach megastar status, so why can't it be an intelligent and thoughtful sister?! Why does it have to be this airhead Beyonce, with her blonde wigs and nose job and bad business ethics!
7:37 AM, February 24, 2011

Liz Dwyer said…
Rosita,
Wow, first black anchor was only five years ago? That is ridiculously sad. :( Really interesting point about the difference between Africans and African Americans are treated in France.

Tracy,
I think she's talented but good lord she works my nerves and I can NOT deal with interviews with her. I've actually had a nightmare before where I'm trapped in a conversation with her.
10:17 PM, February 24, 2011