Last night, my movie going experience transcended the usual kiddie fare I've been exposing myself to. Not to say that Chicken Little and Ice Age: The Meltdown weren't enjoyable. They were. Well, sorta.

It's just that I haven't been to a movie with my husband Elarryo since we went to see the final Lord of the Rings movie. Yep, it's been a long time.

Why not go out to the movies more?

A) Cost: Unless we get a matinee showing, which is next to impossible, the movie tickets are going to cost us between $18-20. Whatever movie we see had better be phenomenal for that kind of money. Then there's the cost of parking. This is generally around $4, even with validation. Since we don't have our kids with us, we may also be paying for...
B) Babysitters: I want to go out with Elarryo but I also don't want to be the kind of parent that has a sitter watching my kids every Friday night. Teenagers make me wary and you have to pay them, contributing to the cost factor. Besides, if you are paying the sitter eight dollars an hour and you are gone for three hours, that equals $24. Add the cost of the tickets and paying for parking and the latest that Hollywood has to offer is costing me $50. Sure, friends will watch the kids for free, but they are also busy with their own weekend pursuits. And besides, they didn't have the kids, we did, so it's our job to take care of them, not theirs.
C) Quality of Interaction: If I do go out on a "date" with my husband and we are spending the whole time staring at a movie screen, guess what? We aren't talking to each other. If we go to dinner so we have some actual chat time, guess what? That's more money. Plus dinner and a movie equals more time that you have to pay a sitter.
D) Movie Quality: Fantastic movies seem to be few and far between. Most of them I Why would I go through all this to see the forthcoming Samuel L. Jackson vehicle, "Snakes on a Plane" or other tawdry fare such as "Basic Instinct II?" If the movie is a clunker, a pair of shoes is a better investment. 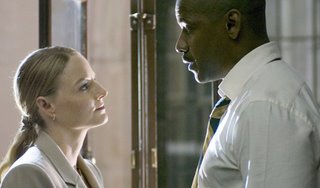 But, yesterday was Elarryo's birthday and "Inside Man" has been getting great reviews. Denzel Washington. Jodie Foster. Clive Owen. Spike Lee directing. What more could we ask for? The stars aligned when my friend Maisha offered to watch Olinga and Toussaint while we went out. Olinga and Toussaint were thrilled because they love Maisha's kids and had been begging to go over there.

Elarryo and I dropped the kids off at Maisha's house in South Pasadena and headed over to Paseo Colorado in Pasadena. We'd never been there before so at first it was a bit of a chore to navigate their horribly illogical parking structure. We're smart cookies though so after only fifteen minutes of utter confusion, the parking was accomplished and we headed upstairs to the outdoor mall and strolled to the theatre. Two tickets for the 7:00 show were $19.50. Since I've lived in L.A. for eight years, I should be past the sticker shock factor but it still surprises me every time.

We then went to dinner at P.F. Chang's, Elarryo's favorite Chinese place, where we sat next to a Lisa Raye wannabe who kept asking the date she was with, "So what are you thinking about right now?" Chirping crickets were audible over at their table. He kept ordering drinks and she ordered the appetizer of ribs. Now, no one in their right minds orders ribs at a Chinese place. Logic says, you order Chinese food at a Chinese place. It's like folks who order steak at Denny's and then complain that it's kinda tough. I wondered later if she was trying to give the guy something to think about when she declared the ribs unedible. The manager had to come over and see what the problem was. "They're nasty. They don't look or taste like ribs. I'm not paying for this." Weave tossed and neck roll in effect. The manager cleared the ribs away.

After dinner, we went back over to the theatre. The lines were crazy at the box office but since we'd already purchased our tickets, it was straight inside to the theatre. You know a movie is good when the previews haven't even started and the only seats left are the five rows in the front! I won't tell you anything about the plot since the film is one of those that's best if you know nothing. It did prove to be well worth the admission price. Jodie Foster is evil and sexy with killer legs and ridiculous high heels. Denzel is crazy, smooth and hilarious, all at the same time. Clive is mysterious and serious. And Spike is still Spike, thank goodness.

Movie ended, we went and scooped up the kids and laughed about how we used to do the movie and dinner thing at least once a week. We didn't worry so much about cost and parking and whether the movie would be good or not back then. Thank goodness we have children to set us straight now.
Email Post