Throwback Thursday: What I Looked Like Before I Knew Depeche Mode Existed 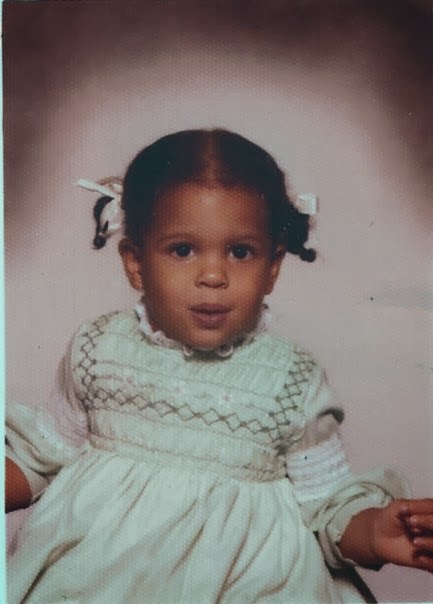 Look at that those satin hair ribbons and the pink roses against that delicate light green fabric. I'm soooo ready to walk the 1-year-old catwalk, and clearly, I had yet to meet the color black.

This image got dug out of the digital stacks today because my sons wanted to see a baby picture of me. This is a scan of a photo my dad sent me a few years ago after me complaining for years that I didn't have any hard copies of any of my baby pictures. He finally caved and sent me this photo after I told him the following story:

Long ago, in a land not so far away, I was working for a nonprofit that enjoyed having 5-hour staff meetings. It was decided that we needed to have a team-building ice breaker at the start of one of these marathon, sitting-in-a-chair events. My then-manager's manager thought using baby pictures in the icebreaker would be a good idea. I think we were supposed to talk about all the hopes and dreams we'd had as a baby, or maybe it was getting in touch with your inner child at work? I don't remember, but I do recall that I emailed this person's assistant (we were supposed to send the photos to the assistant) and I explained that I had a little problem: I had zero baby pictures.

The assistant wrote me back a salty email telling me that bringing a baby picture was a requirement for the icebreaker, so I needed to find one.

It struck me then--and now--how people can get so caught up in what is normal for them that they don't think how that's not the end all, be all of reality. Having baby pictures might not be a given for everyone. My manager and her assistant had no way of knowing if:

None of that was the case for me. My mom just hoards baby pictures like nothing else--as is her right. She gave birth to me, she can keep those baby pictures. Since I really didn't have one, what was I supposed to do? Borrow a friend's baby picture and pass it off as myself?

Maybe it could've worked. Initially, my sons couldn't believe that that baby pictured above wearing a frilly dress with ribbons in her hair is me. "I mean, it looks like you but it's all girly and you're not wearing any black at all," my 12-year-old, Mr. O, remarked. "I guess you weren't listening to much Depeche Mode back then."

"I mostly listened to Mozart," I replied. "I'm cultured like that."

I'm so cultured, let me tell you about the super juicy turn Baby Picture Gate took. I was mistakenly cc'd on an email thread between the assistant and her boss. She said something to the effect of "Just so you know, Liz is being very difficult about bringing a baby picture." The manager replied that I was obviously lying about not having a baby picture because everybody has baby pictures, so she was going to have to come down hard on me. The manager told her assistant to reply to me with an ultimatum: I had no choice. Bring a baby picture, or I'd have to have a discussion about my lack of cooperation with the manager.

FYI: If you are at a job where folks turn into megalomaniacs and trip that hard about a baby picture, you know it's time to go.

I never got sent to the principal's office because it turned out that someone else in the office didn't have easy access to a baby picture either. Only then were we given the option to bring either a baby picture or some other ice-breaker-y memento.

I can't remember what the non-baby picture option was. I've tried to block most of that tedious staff meeting--a good portion of it was spent receiving "Are we in Mordor?" text messages from colleagues--out of my mind. But I do know if I ever write a workplace mockmentary sitcom, that situation's going in it. Except maybe in the sitcom, the black main character will cut a picture of the white Gerber Baby out of a magazine and be like, "Here I am! Goo-goo, ga-ga!"

What could the sitcom boss say? They could get sued for saying something like, "You were so white as a baby, but now you're so black," right?

As for Depeche Mode, what do they have to say about my "no black anything" baby look?