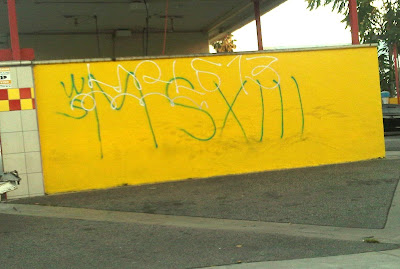 I often feel like I live on a dividing line between two worlds. Go east and uphill from me and it's $$$ housing—mostly white yuppies driving Volkswagen SUVs, and hipsters making trees out of chicken wire. Go west and downhill and it's a fairly low income, densely populated, mostly Latino immigrant—heavily El Salvadorean, and Guatemalan—community. Roosters crow in the morning and families cook all day in preparation for birthday parties. But I've learned the hard way not to ask moms down the hill if they're on a diet. They might tell you no, they just can't afford to eat too much. So imagine the irony when a cafe/restaurant opened down the hill last fall that sold brioche toast for $6.75 a pop.

This cafe has outdoor seating, so everyone munching on that toast—and the other savory and sweet things on the menu—can enjoy it while looking across the street at the run-down apartments and kids playing barefoot in the grassless dust. Perhaps the patrons consider that poverty to be part of the ambiance.

Or perhaps they're hoping that the gentrification will spread so that they can enjoy themselves without having to look at the people who call this neighborhood home.

There's no sign up in this place that says "Latinos Not Allowed" or "If You Are Brown, Don't Come Around," but in my daily walks and drives by I rarely see the neighborhood represented in there. Instead, a majority white hipster clientele is always lined up to enjoy the $5 coffee served via mason jar. One time I walked by and the line was out the door. I counted 33 white faces either already in line or sitting around on the tables and chairs outside on the public sidewalk. The only brown face? Bussing tables, of course. And I got stared at like folks were wondering what the heck I was doing in there.

Although I have a visceral negative reaction every time I go by this place, not everyone I know thinks this place is terrible. "It's cool to finally have something nice come to the neighborhood," one acquaintance told me. Never mind that a significant number of the neighbors aren't partaking. "Well the neighborhood is changing," was the reply.

Which to me is code language for being OK with people of color being pushed out of their communities by unscrupulous landlords so that apartments can be rented to "people like us"—people with more dollars in their pocketbooks. It's saying you're OK with lower income people of color not having nice things on their blocks until white folks move in. And then they're priced out of those nice things.

"Well maybe it's not their thing," another person told me. "Maybe they're not into coffee."

Oh, yes that MUST be it. People from El Salvador and Guatemala aren't into coffee...They just grow it for the rest of us to consume but deep down they hate that shit.

I've considered going and having a conversation with the owners about becoming part of an existing neighborhood and do they really believe that locally grown, organic food has to cost that much? How about a discount for folks who live within a six-block radius of the place? I've considered going down the hill and standing outside this place with a sign that says, "LOOK ACROSS THE STREET."

I even suggested to a friend who lives a few blocks away that we should make a statement by getting all the Latina moms we know and treat 'em to coffee—we'll bring our kids, they can bring their kids, and then we can just chill in the place and sit in the seats lining the sidewalk in front for a couple of hours, enjoying overpriced coffee and food...and see how the regular customers react. See how the owners react.

But there's also another presence in the neighborhood that has, in recent weeks, been making itself known through ever more frequent tagging: MS-13. Yes, those who worship at the altar of Mara Salvatrucha haven't yet been driven away. Go down the hill from my house and walk through the neighborhood and oh yes, their presence is certainly there—as is the presence of a few other gangs or factions.

I snapped the above photo a block away from the hipster cafe, and found myself wishing that one of these days all the homies from MS-13 would decide to en masse stop into the hipster cafe and get some nearly $7 brioche toast. I would love to be a fly on the wall for that.

Anonymous said…
This is a perfect article. I often comment to my husband that in my area of Southern California I never see a person of color (brown/black/yellow/purple) at neighborhood activities unless they are working. I thought I was the only one that noticed...
5:13 PM, August 09, 2013