Car Vs. Motorcycle: And Then I Saw a Body Flying Through the Air 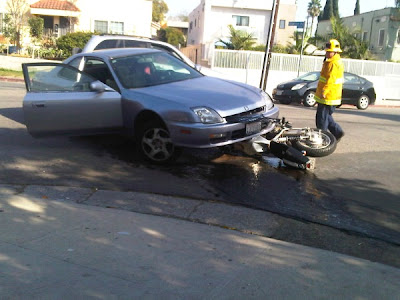 I was trying to have a lazy Sunday afternoon on the sofa--sitting next to an open window, feeling the warm breeze, watching "Dial M For Murder," and sipping pink lemonade...and then came the horrific sound of brakes screeching and metal hitting metal.

I turned my head in time to see a body flying through the air, landing in the street right under my window. I screamed, grabbed my phone, dialed 911 as I ran downstairs--yelling for my husband at the same time that I heard the operator's voice, "911 emergency."

The man on the motorcycle had flown 20 feet from the car and his now-smashed bike. He was horribly still and my husband rushed to him as I screamed into the phone, "We need paramedics right now" and gave our address. I looked over to the car. No driver was inside.

Where was the driver? We are used to hit and runs in our neighborhood. Was this another one?

"Is he moving? Is he conscious? Is there any visible injury?" the operator asked.

No, not moving cos my husband told him to remain still. He's conscious--my husband's right next to him, asking him his name and age and the phone number of someone to call. He's answering but his eyes are closed. No, no blood. No, we won't let him move.

My husband knelt on his right side of the cyclist, and one of my neighbors was now on his other side. "He's 40," my neighbor yelled out. "He's 40," I yelled into the phone. "He knows how old he is."

One of his black, soft leather half boots had flown off as his body soared through the air. It lay in the grass next to the curb... and then I saw a woman crying uncontrollably. "Oh my God, oh my God, oh my God. Is he alright? I didn't mean to hit him..."

Not a hit and run. She better be glad this man isn't dead, I thought to myself. I saw my husband, still kneeling right next to the man on the street pulling out his phone. I leaned over them and realized the man was giving him a phone number.

"He wants me to call his wife," my husband said as he dialed.

Dozens of neighbors poured out of their homes to watch the scene. Two abuelitas began praying in Spanish. I and another neighbor realized we needed to slow and direct the traffic because otherwise, some speeding car would barrel up the hill and run over the downed cyclist, my husband, and our neighbor.

The paramedics arrived in 7 minutes with a fire truck that they used to block off the street and two ambulances. As they put a neck brace on the cyclist and gently rolled him onto a flat board and carried him to a stretcher, they kept saying over and over, "Thank God he had on a helmet..otherwise he'd be dead."

Indeed, he had on a helmet, a protective jacket, gloves, and special glasses. Not an amateur motorcyclist.

LAPD officers showed up 10 minutes later. Everyone on my blocked eavesdropped as the cops interrogated the driver.

At one point she pointed to her car, which lay on top of part of the motorcycle, and began sobbing, "My daddy's going to be so mad about the car."

I swear, my entire neighborhood gave her a collective side eye.

I wasn't there to play police officer, judge, or jury, but I do know we've twice petitioned the City of Los Angeles to make the intersection a four-way stop. Everyone agrees it's dangerous, but we've twice been denied.

In the meantime, slow down, people. It shouldn't need saying but speeding to wherever you need to go can have very real consequences. Suck it up and be a few minutes late, or you'll be crying in front of some cops, wondering if you've paralyzed a man in the prime of his life.
Email Post
Labels: accidents cars Los Angeles