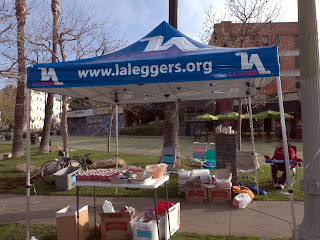 This morning I rose before dawn, slipped on my running shoes, and headed out the door, ready for the 28th annual Los Angeles Marathon. My role in today's race was vastly different than it has been for the past five years. Today I wasn't out on the race course as a runner, I was there as a volunteer.

Why volunteer instead of marathoner? Last August I landed on the "injured and depressed runner" list because of major issues with my Achilles. By January I was feeling pretty good and worked my way up to four mile runs...and probably pushed it too hard, because now I'm back to ice and painkillers. Sometimes it hurts so much it wakes me up at night.

But my running club, the Los Angeles Leggers, has been very good to me over the years--if you want to run a marathon, they'll get you over the finish line--so instead of spending race day moping over not being able to run, I wanted to encourage other people who were on their journey to marathon status, while also hooking them up with water, orange slices, and smiles. About 10 of us manned a tent on Sunset Boulevard, just past mile seven. And truly, it was a wonderful, albeit bittersweet experience.

As a part of the race, I've never seen the road go from empty to filled with wheelchair racers: 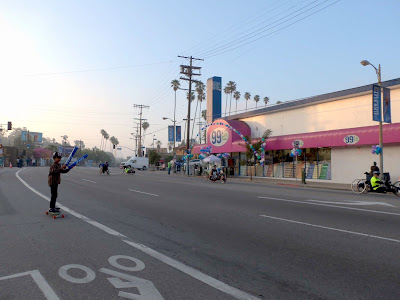 I don't usually see the elite women in full stride: 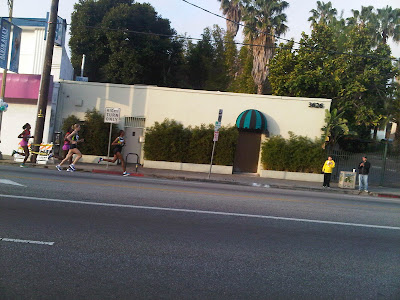 And here's what it looked like when the elite men passed us:

Elite runners aside, what inspires me about running is that anyone can do it. I cheered for people like Paul, a 70-year-old legacy runner who'd been recently hit by a car. He was beaming at mile seven and just happy to be out there. 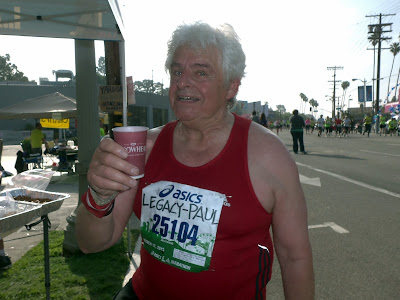 Then there's Rosa, who mentors for both the L.A. Leggers and Students Run LA, which trains teens to run the marathon. She was one of my mentors in my first training season and she's still going strong! 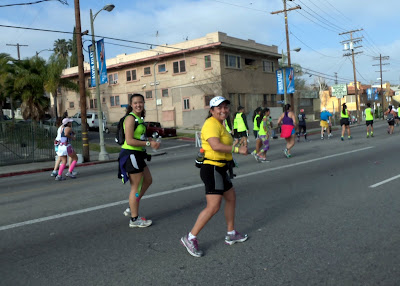 And Sarge, a veteran who carries his flag on every L.A. Leggers training run and during marathons is the epitome of "don't give up." 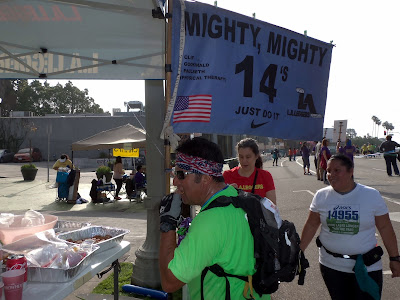 My sons got out there and cheered, too. Mr. T (as you can see in the video above) was a skateboarding cheer machine, and Mr. O maintained his laid-back middle schooler vibe while banging those noisemakers together. 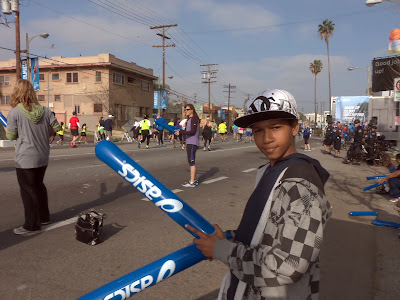 As the hours passed, the number of marathoners--whether you run, walk, or C-walk your way to the finish, you're a marathoner--began to slow to a trickle and LAPD motocycles began zooming past, signaling that the street would soon re-open to traffic.

The last marathoners I saw on the course were these two lovely ladies, one of whom has special needs. 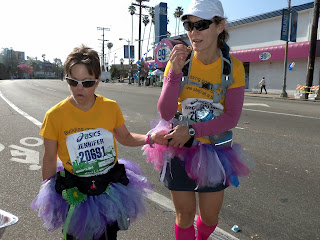 What an honor to get to cheer for them and all the others who bravely attempted a physical feat that less than 1 percent of Americans ever achieve.

I'll admit that I started crying after these two passed by. I love running so much, and it had become such a central part of my life, so to not be able to do it...and to know that I would not be crossing the finish line 19 miles away, was terribly sad for me.

But there was no time for maudlin thoughts. The cleanup crew came along, sweeping away any evidence that 24,000 people had just traveled down the road. 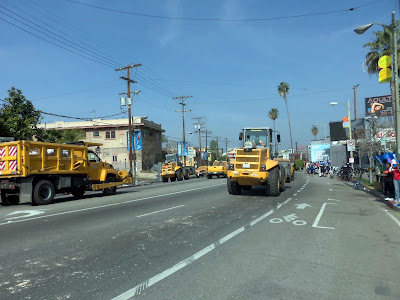 And in mere moments, Silver Lake was Hipstervania... 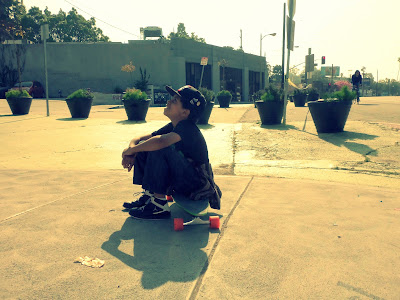 Monique said…
I was wondering if you ran. Sorry about your injury, but glad to hear you volunteered. Love the new design, by the way.
3:09 PM, March 20, 2013

Los Angelista said…
Monique, Thanks for wondering...it was good to volunteer but I sure do hope to be back at it soon. I really miss running, but the chronic nature of this worries me.
7:18 AM, March 25, 2013