A Year After Trayvon Martin, My Sons Are Still 'Suspicious' 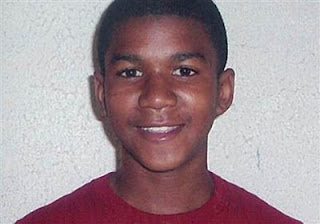 Hoodies. This morning Los Angeles was a chilly 46 degrees and both of my sons, 9-year-old Mr. T and 12-year-old Mr. O pulled on hoodies.

All the kids around here wear them. In an attempt to raise money for their cash-strapped campus, Mr. O's middle school is even selling a special hoodie emblazoned with the school mascot. I think it's cute and was willing to plunk down $29 for it. He thinks it's "corny." He'd rather wear the plain blue hoodie required as part of the school uniform.

But of course, hoodies now represent something else in our culture. As my boys bounced out to the garage, playfully complaining about "why do I have to go to school?" I walked behind them, all too aware that today was the anniversary of the murder of another black boy in a hoodie, Trayvon Martin.

As we pulled out of the garage, I told them. "So today is the first anniversary of Trayvon Martin's murder."

"Yeah. George Zimmerman," T continued. "Is he in jail?"

"He's in jail," I said. "But his case hasn't gone to trial. He could still be acquitted."

They were outraged that the case is still pending, and that Zimmerman isn't already serving a life sentence.

"We have to let the process of the justice system play itself out," I told them.

"Yeah, the same justice system that stops and frisks black men all the time for nothing," Mr. O said as he got out of the car at his school.

Twenty minutes later I said goodbye to Mr. T and I felt yet again for Trayvon's mother. We never know whether the goodbye you're saying is the last goodbye you'll have.

After kissing them goodnight tonight, I reflected on something I wrote last year for my day job about how Trayvon could have been either of my boys:


I don’t think my sons are safe anywhere, and I often feel extreme anxiety over what might happen to them when they walk out the door each morning. But my boys don’t believe they can be gunned down like Trayvon. "I don’t think anything like this would happen to us because of the place we live," my 8-year-old told me last night after watching updates about the investigation on the evening news. "We’ve never heard of anybody getting killed on our street."

I'm glad he believes he's safe, but Trayvon was in a gated community, not an urban ghetto. Ruha Benjamin, assistant professor of sociology and African American studies at Boston University, says middle-class black Americans cannot "buy our way out of racial violence." Benjamin, who has two boys of her own, says the reality is that our sons, "no matter how well-dressed, how well-spoken, might be in the wrong gated community with the wrong bag of threatening Skittles and get mowed down by someone who has decided, essentially, they are out of place."

This is still true. A year later, it is still true. My sons are still suspicious. Ruha's boys are, too. As long as racism reigns over America. No black boy is safe.