Nope, Still Not Over a 9-Year-Old Girl Being Called a Cunt 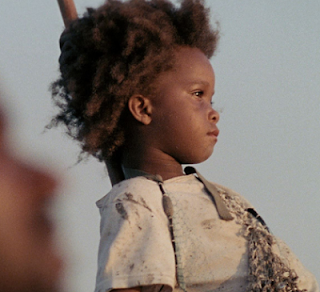 Sunday night during the 85th annual Academy Awards show my 9-year-old son, Mr. T, was pretty jealous of one of his peers, 9-year-old Quvenzhané Wallis, the star of Beasts of the Southern Wild.

"So wait, she's the same age as me and she could win Best Actress?" he asked. I nodded my head yes. "She must be really good....are those statues made out of solid gold? She's sooooo lucky."

Only a few minutes after we scrunched our noses at "the Hunger Games girl" beating Quvenzhané for a performance that is not Katniss, a staffer at the Onion posted its now infamous tweet: 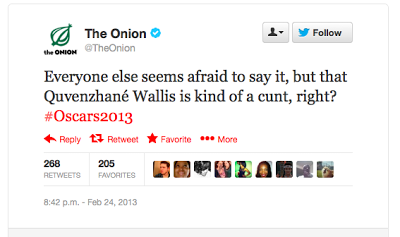 
"No person should be subjected to such a senseless, humorless comment masquerading as satire. The tweet was taken down within an hour of publication. We have instituted new and tighter Twitter procedures to ensure that this kind of mistake does not occur again. In addition, we are taking immediate steps to discipline those individuals responsible. Miss Wallis, you are young and talented and deserve better. All of us at The Onion are deeply sorry."

I appreciate the apology--although they needed to apologize to her parents, too--but 24 hours later, I'm still bothered by the whole situation.

I'm not over how some folks decided it was time to school those of us who were offended on the definition of satire. For your perusal, here's the Oxford dictionary's definition:


"the use of humour, irony, exaggeration, or ridicule to expose and criticize people's stupidity or vices, particularly in the context of contemporary politics and other topical issues."

You want to read satire? Check out Jonathan Swift's "A Modest Proposal." It's a masterpiece of satire and--shocker--no one gets called a cunt.

Calling a little girl a name like that isn't satire. It's vile misogyny that dives headfirst into the waters of racism. If you're questioning whether it's racism, ask yourself if young white actresses of Quvenzhané's caliber have ever been disrespected in such a manner.

I'm also not over how folks tried to silence those of us who were not having it. One guy had the nerve to reply to me that some women he knows like being called that word. That response is right up there with "some of my best friends are black."

And still others are saying that if the Onion censors itself with these so-called tighter Twitter procedures, free speech as we know it will end...because the fate of free speech and democracy depends on the Onion being able to call 9-year-old girls cunts, obviously.

I am all for free speech, but words are power. And anyone who's ever picked up a Spiderman comic (or read Voltaire) knows,"With great power comes great responsibility." So you can say whatever you want but ultimately, you are responsible for the consequences of your words.

Why is that so hard to understand? Which brings me back to what I said after I first saw the tweet:

Is the discipline over at the Onion going to involve someone getting fired? When there is no real consequence, folks feel free to "go there" again. Of course, there will be no real consequence if this is a "Dude, you got us SO many page views with your controversial tweet...Don't worry about anything," situation. Hmm...I think we should all email Steve Hannah (shannah@theonion.com) and ask him to be more specific about what exactly he means by "discipline." Spell it out for me, please.

As for young Quvenzhané, go see her movie. Buy the DVD when it comes out. Support her with the only thing Hollywood cares about in the end--your money. It'll be worth it cos as even my son could tell, she is really good.
Email Post
Labels: Academy Awards freedom Movies Oscar's racism sexism twitter

Liz Dwyer said…
So true, all of the folks who replied to me saying it was no big deal, etc, were men. But what gives me hope is that so many men on Twitter were not having it and stepped up to challenge the tweet.
9:49 AM, February 26, 2013

Liz Dwyer said…
I really want to know what the discipline in this instance looks like. We could all learn a lot from how they handle it internally, so why not be transparent and share the whole thing?
9:58 AM, February 26, 2013

Sundry said…
Satire's supposed to have a constructive element. Why not use a word that really describes the behavior The Onion writer was annoyed by? A little girl's moment of unabashed pride and enthusiasm doesn't really warrant being labeled so harshly. Cheap and lazy.
12:14 PM, February 26, 2013

jef said…
My wife thought it was funny. Me, less so, although I didn't find it overly offensive either. Just unnecessary.
5:48 PM, February 27, 2013

Amy said…
Thank you Liz Dwyer. unfortunately such so-called humour is too often used to disguise and defend vile misogyny and/or racism. After all, it's just a joke, right? That type of "joke" gives people cover who want to express otherwise unacceptable sentiments. And a lot of people are quick to defend it, because it also allows them to revel in a lil' bit of racist/female hating fun without the drama or consequences of being called racist/woman hating. Here's what "funny", the fact that almost all of this type of "joking" is directed at blacks & females. Why is that?? Could it be that this type of "comedy" is just another way to express misogyny/racism & oppress females & black people? Of course it is. Words are not just words. Many women know that. Look at what "feminazi" has accomplished. It is trotted out immediately after a woman tries to fight back against this kind of stuff. With one word, and all that is associate with it, argument can be silenced. Many women are so afraid of the feminazi label that they are effectively silenced by the mere threat of of it. Feminist is now a dirty word. God forbid that men think you are a man-hating, lesbian, ugly feminist!
Having said all that, I do think it is a positive sign that an apology was issued quicky. But it is not enough. There are people who don't want to see a young black girl soar, so they need to tear her down & put her back into her "place." There is still so much we have to overcome here in the United States. And the rest of the world....when I think too much about it, I feel hopeless for womankind.
5:23 PM, March 07, 2013