If You Live in Hipstervania, Is it Inevitable That Your Kid Will Become One? 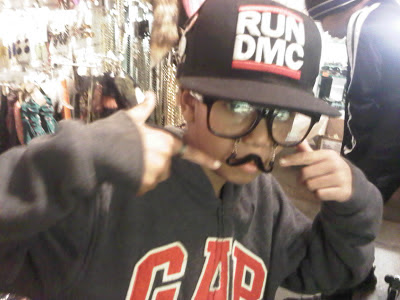 Forget the itchy-mcscratchy process of growing your own mustache for Movember. Nine-year-old Mr. T has discovered the ultimate in ironic facial hair: a bit of lip fur attached by a chain to a big pair of hipster glasses. We were over at Popkiller in Los Feliz earlier tonight and he glommed onto these glasses and plunked down $12 for them. "I'm gonna rock these every day," he told me as we strolled back to our car. Indeed, he has passed out on the couch and these glasses are on his face.

"You look like one of those annoying hipsters," 11-year-old Mr. O told him.

"DO NOT!" T yelled back. He was quite insulted by being called a hipster. "I just have my own style," he said.

That is true. He has always been particular about his appearance. We were out on Sunset Blvd. the other day--me walking the dog, him on his skateboard--and we ran into a friend. She said to him, "Let me check out your swag."

He showed her his stash of keychains--including a shamrock one that flashes the word "lucky"--hanging from his belt. He also wears clip-on bow ties with t-shirts and suspenders, and sticks Depeche Mode pins on his RUN DMC hat.

I guess I could force him to wear more average/conservative clothes but that would probably kill his spirit. I like that he has a creative outlet with his clothes and I have no problem with him having his own sense of style. That said, hipsters are pretty annoying. Maybe by the time he's an adult, there'll be some sort of post-hipster thing and I won't have to see him wearing a different pair of ironic glasses every day.
Email Post
Labels: hipsters Mr. T

Liz Dwyer said…
Nick,
The GAP could be his saving grace! T pointed this out to his brother--although he did own the fact that he did not pick out that jacket himself since it was a gift and he lost his other jacket and so has no choice but to wear that one.
9:42 AM, December 03, 2012