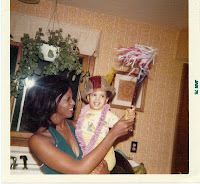 It's the end of an era in Los Angelistastan.

In an hour I kiss 39-years-old goodbye and embrace The Age That Must Not Be Named When You Live in Los Angeles:

Don't worry, there's no Elizabeth Bathory-style effort to stay young going on here. Instead, we're kinda already setting it off. As you can see from the photo to your left, I've never been one to shy away from a party. Also, is my mom a banger or what?

Instead of thinking about how much getting older sucks, I'm contemplating the alternative: If you're not getting older, that means you're dead and right now I'm totally fine with not hearing a banshee calling my name. Besides 9-year-old Mr T. is the DJ for my party tomorrow so he's running his setlist by me.

"What's that song that makes you cry every time you hear it?" he just asked.

"That would be Peter Schilling's 'Major Tom'" I replied.

"Yeah, I won't play that one for you...you don't want to cry in front of all your friends. Unless you really want to," he replied.

"How about some White Stripes instead?"

And then we had to have a conversation about whose birthday is going down tomorrow.

Earlier today Mr. T asked me what was the best thing that happened to me in my thirties.

And it's true. Just as Mr. O changed my twenties, Mr. T changed my thirties. Being a mom to both of my sons has been the best part of the past decade because they make me a better person--and we have a whole lot of fun together--although if they never had another piece of homework, I wouldn't be mad.

But T reminded me that I've also done lots of cool stuff like been to Australia, visited the Magic Castle a bunch of times--it had been an obsession since I moved to Los Angeles--and visited Hearst Castle, which I'd wanted to do since I was a kid.

Now that I think about it, in the past five years alone, I completely changed careers, stopped straightening my hair and let it grow out natural, and became a multiple-marathoner. I also saw Depeche Mode a bunch of times, met Martin Gore THREE times--more on that tomorrow--saw Prince FOUR times, and met my Eyecandy Crush of the Century, Orlando Bloom.

I'll stop there because I'm on vacation and no one wants to read some annoying "Look at how may awesome things I've done" list. Especially because I still haven't been to Paris, which is all kinds of effed up. So, dear 39-years-old, it's been real. See you on the other side.

nick said…
Sounds like your thirties were full of good things, and I'm sure your forties will be too. I hope you visit Paris, see Depeche Mode umpteen times and have lots more fun with Mr O and Mr T!
6:02 AM, December 31, 2012