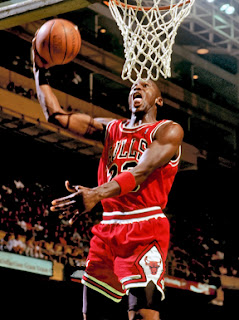 It's Michael Jordan's birthday but as the mom of a tall, 11-year-old black boy, today I'm really feeling the “Linsanity”.

Let me explain: For years my son, Mr. O, has been in the 90th percentile for height. I only roll my eyes a teensy bit these days when folks look him up and down and say, “I bet he’s a killer on the basketball court.”

Do these comments happen solely because he’s tall? Well, I live in the United States, a nation where black boys and their athletically superior bodies are supposed to dominate on the basketball court, so I know better. His height and skin color are what cause folks to infer that he’s the second coming of Jordan.

What amuses me about the assumption is that a. there will never be another Jordan, and b. Mr. O hasn’t scored a single basket this season—and the season’s almost over. In fact, I think he may have scored one or two points in his entire basketball playing history.

Sometimes he gets rebounds and blocks shots, but most of the time, he’s simply having a good time, getting some exercise, and learning to be a team player—what any 11-year-old boy who really wants to be a marine biologist ought to be doing.

By now my son has played long enough that most of the coaches know that when they bring “The Big O” on their team, they’re not getting a kid who will be making endless layups and three point shots.  I’m OK with that. I smile ear to ear through every game and cheer my heart out for him and his teammates.

Real talk: I’m probably a little too happy that I have a black male child who so effortlessly goes against the stereotype of being a budding basketball star. I admit I’ve focused more on cultivating a nerd than an athlete. And, if I’m going to have a conversation with Mr. O about where he needs to put in work and step up his game, that conversation is going to focus on academics, not on sports.

So, what does all this have to do with Linsanity? Well, I live in a fairly diverse neighborhood and several times a week I get to see other kids who happen to be Korean, Japanese, Chinese and Filipino playing ball. Some are in the same boat ability-wise as Mr. O—but a few of them have some serious skills.

What’s sad is that because of racial stereotyping, if I take one of the Asian American kids who’s really good at basketball and stick them next to my son, the average person will make racist assumptions about both. Black boys aren’t born with two basketballs in their scrotum and Asian boys don’t come out reciting Pi to 10 digits—but you know as well as I do that this is how our racist culture portrays both groups. My son will be perceived as the future basketball player and the Asian kid will be seen as the future marine biologist.

Like so many other people out there, I hope Lin's success helps more folks stop determining what people can do—or should be doing—because of their racial or ethnic background. It's also nice to see how Lin's become a positive example for all the Asian American kids I see hooping every week—so many kids and their parents were talking about him at Mr. O's last game and their smiles and obvious pride were heartwarming. And, of course, it's  great for my sons—and all the other non-Asian kids—to see an adult Asian male doing something that is so opposite of the racial stereotype-based messages they get of what Asian men do.

That's a lot of pressure to put on Lin—he's just a young man who should be able to enjoy his success and let that be that. Indeed, if he does nothing else, his story has proved a point.

As for Mr. O, when it comes to basketball maybe he will be a late bloomer and have his own Cinderella story.  If he does, I'll be courtside, cheering harder than ever. After all, as Jeremy Lin has shown, it's more fun to root for the hero that no one saw coming.

ed said…
I really enjoyed this post. Props to you for supporting your son to have fun and be who he is. Props to you for rolling with (and hopefully educating Mr. O to navigate) the racial stereotypes that he will continue to counter. Unfortunately, I don't think that Linsanity will shift stereotypes too much. The hype is specifically because Lin is operating against type. But do we really think that this will open the gates for Asian American ballers? Doubtful.

Sundry said…
Tall boys are going to get the basketball once-over. My dad was a basketball jock in Indiana way back when he only had to be 6'2" to stand out. My white lanky, awkward, sensitive heroic 6'4" brother was pretty much tormented by the sport except when he played pick up games with friends. At 60+ people still ask if he played ball with this big knowing grin on their faces.

A white friend from Texas who's 6'8" (that's what he admits to on his acting resume, but I think he's two inches taller) used to get really belligerent with people who asked if he played basketball, which he did in high school, but not at a star level. He let it cause him a lot of grief.

People make all kinds of layers of assumptions about us based on the surface. I know you'll do a great job of helping the Misters roll with them with grace. They're so gorgeous, people will be asking them if they're actors or models. They're so smart, they'll be asking them if they plan to go into whatever field they hold in highest regard...doctors, lawyers, athletes, maybe?

Whatever they become, I have faith that intelligent and thoughtful will be the top of the list of their attributes.
10:01 AM, February 19, 2012

Neil said…
Anything that goes against the established stereotype is good for society. Sounds like your son will be just fine, good at basketball or not.
6:53 PM, February 19, 2012

nick said…
From what I see, black kids in the UK aren't so typically stereotyped as good at sport, but are assumed to have talents for all sorts of things, from marine biology to journalism to whatever. But as I don't have any black friends to ask about it, I may be mistaken. I'm glad you're encouraging Mr O to be exactly what he wants to be.
1:40 PM, February 20, 2012

Anonymous said…
Hi, I liked your post a lot. My son is a good ball player and fits the stereotype of Black athlete. I keep putting the scholar part on blast because I want those around him to encourage and expect him to show his brain power. We recently discovered the Max Axiom Super Scientist series of graphic books that feature different scientific topics. I thought of them when I read that Mr. O wants to be a marine biologist. It's wonderful to have a Black scientist as the protagonist in the series.
5:10 PM, February 20, 2012

Anonymous said…
Does he really want to be a marine biologist? I always recommended that to my kids - "good healthy outdoor work" - but they never bit.
I'll be walking the Marathon, sorry you were too sick to train.
Jenny
1:26 PM, February 23, 2012