It Really Is the End of the World: Sly Stone is Homeless

Ever wonder how it would feel to go from living in a massive mansion to being homeless? Sadly, funk legend Sly Stone can now tell us all what it's like. These days Stone's fortune is gone and he sleeps in this white van parked in the Crenshaw area.

Apparently, Sly lost everything thanks to shading dealings on the part of his manger--he's suing the dude for $50 million to try to get some of it back--and some serious drug addiction. A retired couple took pity on him and lets him shower in their house and their son gives him food.

For real. A musical genius living in a van. This is now Exhibit A for why I believe all those the-end-of-the-world-is-here fanatics.

But before you go on a rant about how that's his fault for smoking up his money and trusting his manager, think about this:

If you turn on TV, you're going to see J.Lo. in that dumb Fiat Commercial where she's singing that horrid song, "Papi". 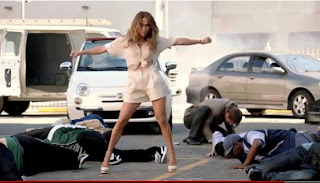 J.Lo., whose "talent" as a singer has always been questionable at best. She's always bleating about her "rocks". Yawn.

Why can't Fiat hire someone like Sly Stone to hawk their car? I mean, at least we know he wouldn't show up wearning some ugly pleated shorts.

For real, I'm no fashionista but c'mon, even I know that pleated shorts look horrible on EVERYONE. And can't you imagine the cool outfit Sly would wear to this video? This Fiat car (which I can't even name because I'm so distracted by J.No's annoying azz) would probably sell like hotcakes if they put him in it.

Yeah, next time around, Fiat, hire Sly instead of J.No. And while I'm issuing directives, Dr. Drew, reach out to him and put him on Celebrity Rehab--or, better yet, help him without whoring him out on TV.

Tacha said…
I own a pleated short jumpsuit. In fact, I *just* bought it. With my long, thick legs it does a great job of camouflaging. But, back to Sly. . .he did smoke his money. It's sad, and quite frankly, a pretty standard consequence of drug addiction. Who's to say the same thing wouldn't happen if HE became the spokesperson for Fiat?
9:19 AM, September 26, 2011

Liz Dwyer said…
Tacha,
OK, so you may be the exception. I am completely biased against pleats. They may be one of my least favorite inventions.

As for smoking up his money...well, I don't know what percent went to drugs and what percent was allegedly stolen by his shady manager. But I would still rather see him in a Fiat at than J.Lo.
10:27 AM, September 26, 2011

Melanism said…
Too many people owe their careers to Sly Stone's influence for this man to be homeless.
10:51 AM, September 26, 2011

nick said…
Surprising how many people go from rich and famous to down-and-out through one fatal mistake or another. It's frighteningly easy to get through large amounts of money once you're in the grip of a serious addiction. Or in the grip of some unscrupulous hanger-on.

Liz Dwyer said…
Melanism
IKR? I know it's impossible to help someone who doesn't want to help himself, but I hope folks give it a try. He's a legend--he has problems, sure, but he's a legend.

Nick,
It really is surprising. Apparently Michael Jackson bought the rights to Sly Stone's music for a more $1 million --and MJ was teetering on the brink of "broke" for awhile there.

Ugh, now that the holidays are coming, expect even more annoying car adverts. Lexus' December to Remember ALWAYS makes me want to stab my eyeballs out.
4:25 PM, September 26, 2011

Joy said…
Where in the Crenshaw area? Leimert? Jefferson Park area (I hate that name)? I want to try and find him and help him somehow. DAMN! Really?
7:58 PM, September 26, 2011

Anonymous said…
I am a size 4 and I look great in pleated shorts. Alright I look great in just about anything but anyhoo... people make mistakes and everybody deserves a second chance. I hope he finds his way out of poverty and into success again.
12:59 AM, September 27, 2011

Liz Dwyer said…
Joy,
No idea. All I've read is that it's on a residential street...but you know everybody is gonna be on the lookout for that van.

Anon,
OK, so you are the second exception to the pleated shorts are horrid maxim. But ugh, I gotta tell you, I see plenty of ladies around here who wear 'em and it is not working.

But, more pressing, and more depressing, is the status of Mr. Stone. For him to be homeless means the folks he helped up on his way up have all abandoned him for one reason or another. That's truly sad. Doesn't he have a sister in this area somewhere? I mean, I know most folks don't want an addict living in their homes, but has anyone tried to put him in rehab?

Who am I kidding, I'm sure someone, probably many folks, have tried to help him. But yeah, in the end, the addict has to want to help himself. What a terrible disease drug addiction is, and very sad that this genius has been battling this affliction for so long.

Anonymous said…
Thank you for noticing those horrible shorts! I just saw that commercial last night and was thinking the same thing, namely "What is she wearing? Are those ....?" Eek, so unflattering.
8:02 PM, September 30, 2011