First World Problems: Your Local Target Is Out of Missoni 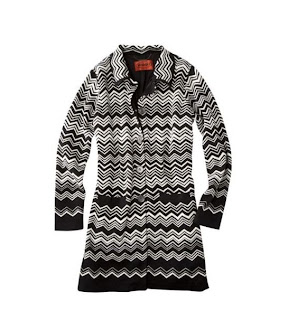 “Well, when are you going to get Missoni back in stock??? This is just ridiculous! Absolutely ridiculous!”

That was a woman in Target at 8:30 a.m. this morning. Never mind that the much-anticipated collection from the famed Italian design house went on sale yesterday. Never mind that it was projected to sell like crazy, and never mind that people went so bananas that they crashed Target’s website buying it up.

Here was this day-late-and-a-dollar-short woman, outraged that the shelves were bare--for real, those Target shelves are so bare it looked like wild animals ravaged the store. I can't even imagine the pandemonium that must've gone down.

The poor Target employees were all, “Um, we don’t know when it’s going to be back in stock, ma’am.”

Give Me Missoni OR ELSE wasn't having it. “I want to speak to a manager. Right NOW, dammit!” She sucked her teeth and said it again, "This is ridiculous!"

Cut them some slack, heffa! Those poor employees probably really don’t know when it'll get back in stock. Besides, there is TONS of Missoni over on Ebay if you're really that desperate (and stupid).

The markups over on Ebay are insane. Target sold the above black and white Missoni sweater coat for a fairly reasonable $79.99. Over on Ebay, folks are trippin' and bidding $175 for it--and the auction doesn't end for another five days. Sure, that's a steal compared to Missoni's normal you-gotta-be-ballin-to-buy-me prices, but is it really this serious?

Apparently it is. As I was leaving the Target parking garage with my pedestrian purchases of q-tips and some Febreze, I ran into a guy with a Missoni carry-on roller suitcase in the same black and white pattern, which sells for $169.99.

"You decided you didn't like it?" I asked him.
"Oh I like it," he replied, "But I'm gonna go sell it out in front of Target. Some sucker will probably give me $500 bucks for it."

He paused, smiled the most greasy smile you've ever seen, and said, "Interested?"
"Nah, I'm good," I replied.

And really I am. My world isn't going to come to an end because I don't have any Missoni, and psst...yours won't either.

I can understand a sort of "vacation from my middle-class life" interest in being able to buy big-name clothes like a celebrity. I can't understand participating in letting someone else exercise their "vacation from the middle-class" scalper fantasy. But I wouldn't spend $80 on a sweater, either.
6:37 PM, September 14, 2011

Call Family said…
Ok-I'll admit it. I passed by my local Tarjay on my way home from work because I had a few things to pick up AND I was curious about this whole Missoni hype. So, I'll keep it short and simple...it's NOT THAT cute. Most of it was lingerie and kids stuff left and the women's shirt was LOUD! I don't care how famous the designer or "limited" the clothes are.
7:51 PM, September 14, 2011

nick said…
This is the sort of story of crazed consumerism that could only be happening in the 21st century. Thousands of people developing mass hysteria over a brand name. Missoni baloney.
12:11 AM, September 15, 2011

BBJ said…
I kind of liked a couple of the scarves that sold out on the website, but they're not as cute as a lot of things I can get for the same prices from other places. And if you're just buying it for the brand name--it's still Missoni for TARGET, so it's not exactly like you're getting the upscale line.