Reflections on The Grove

A few years ago I was not a happy camper when I heard that a brand new shopping mall called The Grove was going to be built. As construction progressed, I pondered the philosophical dynamics of materialism and consumer-culture in my corner of the globe. Why was another mall needed in the area when The Beverly Center was right down the street and Hollywood and Highland would also be opening a few miles away? My cynical side came out when I saw the list of stores that would call The Grove home. Nothing creative, just the usual, garden variety chains. Apparently someone thought LA really needed another Gap and Banana Republic.

On a practical level, I was happy that a Barnes & Noble would be opening but also figured it was going to be a pain to get there. I figured throngs of hipster sycophants would wreck traffic in the Beverly/3rd Street/Fairfax area in their quest to snap pictures of themselves standing outside the Ambercrombie store. I also figured the place would destroy the quaintness of the Farmer's Market, the LA landmark right next door with the good eats.

Four years later, all my predictions have come true and yet, we go to The Grove at least once every two weeks. The place is overcrowded and overpriced so I ask myself, why do we keep going?

The Grove is more than just a mall in this corner of LA. It is the 21st century version of the town square and an experience that's steeped in a fantasy of fabulousness. The fact that it's no ordinary place becomes apparent when you zoom into the parking garage and see the electronic signs proclaiming the number of parking spots remaining on each level. Seeing the scarcity of spots available in the garage makes you panic, makes you even more anxious to get to the fantasyland you know is waiting on the ground floor.

Once you descend the escalators from the parking garage, you step out onto the mosaic-tiled sidewalk and begin the walk towards the koi pond fountain. Two restaurants have tables lining the pathway. Everyone eating on either side of you is visible and you start to check for famous, or slightly famous, people. The diners are also checking you out as you stroll this cobblestone catwalk. If you have the right look, they are asking themselves, "Didn't I see her in a TV movie? Is he a studio boss?" After a few moments of posing on the edge of the koi pond or chatting on your cell outside Anthropologie, you begin to believe that you are a star.

The Grove is indeed a place to see beautiful and wealthy Angelenos (or those fronting like they are), all wearing the right oversized sunglasses, platform open-toe heels and hip jeans held up by this year's crimson, fashionably-wide belt. Surrounded by all those people and the wonderful things we can buy if we have the credit card limits to do so, we can't possibly be lonely and searching for meaning in our lives. Right?

To distract us from such esoteric wonderings, The Grove also has a trolley ride, a fountain show and a village green on which parents happily turn their toddlers loose. There's a summer concert series where manufactured teen heartthrobs that get their music placed on crap shows like One Tree Hill "perform" to hordes of teens snapping photos with camera phones. In winter, so you can forget that it's 72 degrees outside on Christmas Eve, they even make it snow at The Grove.

When The Grove first opened, it had this restaurant called Madame Wu's. 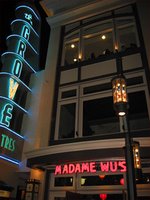 We took our kids there every once in a while since Madame Wu's was inexpensive, although rather mediocre Chinese food. The place lacked spark, shine or exclusivity. It was never crowded and must not have been overly profitable because it quickly shuttered it's doors. By the fall of 2004, signs were posted that proclaimed, "Opening Soon: The Cheesecake Factory." I wasn't thrilled about the opening of a CF at the Grove because it would certainly make the parking situation there even more of a nightmare and I firmly believe that one thing world doesn't need is more chain restaurants.

I'm not a huge CF fan, especially when the wait is usually an hour to get a table. There aren't a ton of vegetarian options on the menu, the portions are too large, big enough to feed a couple of cows, and one slice of overpriced cheesecake is the caloric equivalent of all other food you might consume in a day. Still, there's something I've noticed about The Grove since the advent of the Cheesecake Factory.

Before the CF opened, The Grove had a sprinkling of pepper, paprika and curry, enough to give it a comfortable cultural and ethnic mix. But not too much flavor, and certainly not enough black folks to make white folks clutch their Vuitton purses.

Now though, it's clear that the bottle of hot sauce has been popped open. There's a noticeable increase in the number of brotha's and sistah's in the whole of The Grove. Why? Because black folks LOVE them some Cheesecake Factory! It's one of those build it and they'll come scenarios. Everytime I'm in the CF lobby waiting for a table, half of the other people waiting are black. This is not the norm for a restaurant at The Grove. I've never seen a line of black people waiting to be seated at Morel's. We aren't dying to get a table at The Farm of Beverly Hills.

Of course, the black folks don't just eat at CF and then bounce. No, they go pay $12 at the movies, they check out the Apple store, and they snap pictures of themselves in front of the fountain. And it's the kind of scene where brotha's ain't scared to stroll with their non-black dates and gay black men aren't shy about being seen in public with each other. No one is staring because it's not Leimert Park, it's The Grove.

Is this why I keep going? Is it because I get some sort of perverse satisfaction in seeing The Grove turning into something I think the creators did not intend it to become? Black folks, well, we'll live a fantasy but we'll ruin one too. We'll talk all loud about slavery, reparations and Spike Lee's documentary on Hurricane Katrina...all while posing for those fabulous camera-phone pictures.
Email Post