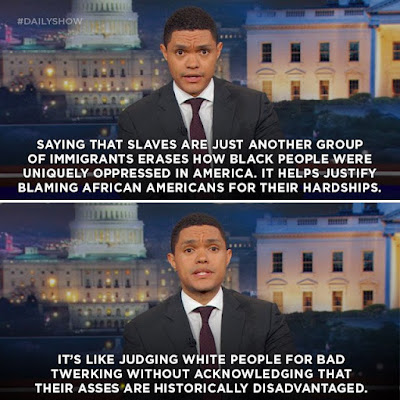 Once upon a time in the late 1840s some of my Dwyer ancestors voluntarily got on a boat and left Ireland for the United States. Their goal: Escape the impoverishment and mass starvation of the Irish by the British...and one day have that experience made fun of by folks who get trashed on St. Patrick's Day and offer to buy you french fries. Because "potato famine."

Sometime between 1619, when the first African slaves were brought to Jamestown, and 1859 when the Clotilde, the last known ship to bring human cargo to the U.S., docked in Mobile Bay, Alabama, my—NO IDEA what their surnames were because those got stripped away when they were abducted—black ancestors arrived in the United States. Their goal: The same as any kidnapped person—stay alive in the hopes that you'll be rescued.

Which one of those two stories is about immigration?

“That’s one way to describe slavery,” The Daily Show host Trevor Noah quipped in response on Tuesday night. “It makes them sound like they work at Walmart.”

After getting dragged on social media for his remarks, Carson defended them, challenging folks to look up the definition of the word immigrant. As you'll see in the video below, Noah did just that, and, ahem, Merriam Webster's definition is giving Carson a serious side-eye.

I ran into the phrasing on Saturday night in Los Angeles, in a space that I was surprised and saddened to hear it—and no, Ben Carson was not present in the room. As Noah points out, this language has also popped up in the speeches of President Obama. "It's seductive to believe that African Americans share in the American immigration story. It's nice to try to sell unity," Noah said.

"The truth is it doesn't matter who says it, slaves weren't immigrants because an immigrant has choice. They choose the country they're going to because they hope it will bring them a better life," Noah said. "Saying that slaves are just another group of immigrants erases how black people were uniquely oppressed in America. It helps justify blaming African-Americans for their hardships."

Sure, Noah made me laugh with his jokes about twerking, the fake Siri response, and his reference to the Eddie Murphy classic Coming to America. But you can see on Noah's face that he wants us to understand. Now that we know better, how about we do better with our word choices?