Heading to the Motherland—The (Kinda) White One 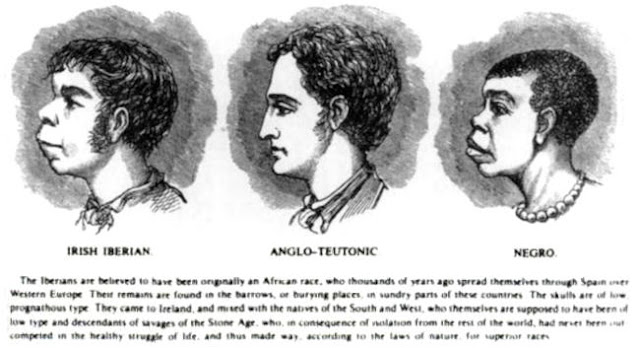 I’m on an Aer Lingus flight somewhere over the Atlantic Ocean, swiftly heading toward the Emerald Isle—the very place that some of my ancestors hail from.

Over the past six weeks I've sifted through digital baptismal records, ship manifests, and census documents to track my father's family. In the process I traced one line of his mom's family back to 1506. German, not Irish—go figure. But those Dwyers, they're definitely Irish. And it's been simultaneously fascinating and sobering to research how and why they came to the United States.

What's heavy on my heart is that researching my mother's family is not so easy. The bloody haze of slavery—and the stripping of the humanity of my ancestors from the black half of me—means no storied tales of arriving on a ship from Ireland and heading to California to find a fortune in the Gold Rush exist.

Of course, the Irish fled because they were persecuted, starved, and enslaved by the British. I mean, I love Depeche Mode and all, but the brutality of what happened in Ireland... let us remember that Jonathan Swift wrote A Modest Proposal in 1729 due to the plight of the Irish.

Full title: A Modest Proposal  For Preventing The Children of Poor People in Ireland From Being Aburden to Their Parents or Country, and For Making Them Beneficial to The Public.

As Swift so expertly wrote:


I have been assured by a very knowing American of my acquaintance in London, that a young healthy child well nursed is at a year old a most delicious, nourishing, and wholesome food, whether stewed, roasted, baked, or boiled; and I make no doubt that it will equally serve in a fricassee or a ragout.

What happened to the Irish and how they were blamed for their poverty and situation—which was intentionally caused by the British—reminds me of the excuses too many Americans give when they are confronted by the effect of racism on black folks. Intentionally set policies designed to disenfranchise communities, but what we see in the U.S. is supposed to be due to lazy black folks who don't want work hard. Remember, they want a handout.

Check that image above from Harpers in 1899. There's plenty written about how the Irish became white in the United States. They escaped the yoke of oppression in part by oppressing black folks.

But if all the black folks with white ancestry in the United States started calling ourselves white, it wouldn't matter. Hiring managers, landlords, car salespeople, checkers at the grocery, can see that we are not. And whitening of resume's aside, I hope no one wants to go back to the era of passing to survive.