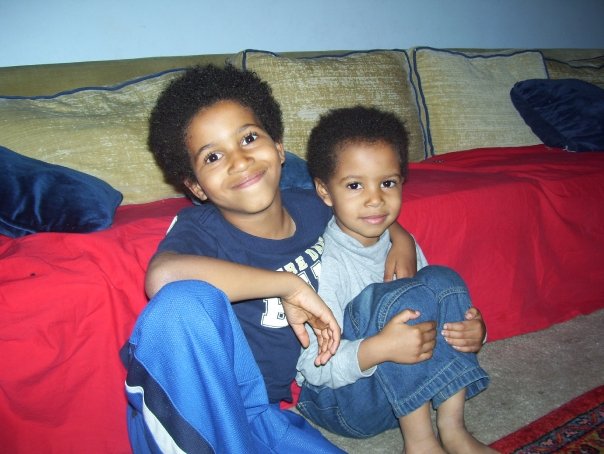 When my now 11 and 14-year-old sons were little boys, I often felt uncomfortable when strangers gushed over how cute they were. It wasn't that they weren't adorable—they were and then some. But the compliments directed at them made me wonder how long it would be before they exited the adorable phase and entered the "you're inherently violent and I'm scared of you" part of life.

For people of African descent in America, this isn't a cynical line of thought.

We don't need to see cell phone video footage of an officer kneeing a 14-year-old girl in a bikini in the back and sitting on top of her, drawing his gun and aiming it at her teenage peers to know that these things happen in America. We live this.

And we don't need to see photos of people holding "Black Lives Matter" protest signs after the death of yet another youth of color to know that this shift in perception—adorable to threatening—will inevitably happen to our sons or daughters. After all, this trajectory of fear is woven into the cottony fabric of America, it's soaked into the soil our ancestors tilled involuntarily, and it has been since African slaves first landed on these shores.

Don't believe me? Needs some facts? 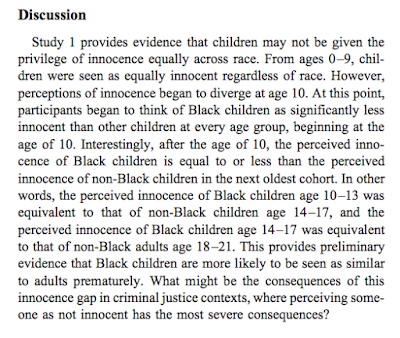 Tamir, Rekia, Trayvon: Those deaths are the consequences.

African Americans don't need the confirmation of a study by the Journal of Personality and Social Psychology to know black children "as young as 10 may not be viewed in the same light of childhood innocence as their white peers, but are instead more likely to be mistaken as older, be perceived as guilty and face police violence if accused of a crime."

Selma director Ava Duvernay tweeted a telling side-by-side photo collage on Monday. The top photo shows what happened in McKinney, Texas: A black teenage child in a bikini is a threat that must be subdued. But drive two hours south and members of a biker gang that killed nine people outside of a Twin Peaks restaurant in Waco, Texas in May are able to hang out freely with law enforcement officers.

In what world are both of these accepted? Ours. #McKinney pic.twitter.com/kXAQ5jVoPt
— Ava DuVernay (@AVAETC) June 7, 2015


In what world are both of these accepted? C'mon, Ava, you just never know when a black teenager's skin might morph into a dangerous, jailhouse weapon.

"Doesn’t this cop have an obligation to protect himself?” Fox News' Sean Hannity asked during his radio show on Tuesday. “They don’t know if those same kids that won’t respect them and take their orders to leave, are they going to hit them in the back with a shank when they’re arresting someone,” he said.

Apparently, black teenagers just roll around with shanks. To pool parties—pool parties at the start of summer. And here I was thinking that the teenage party was as American as apple pie. 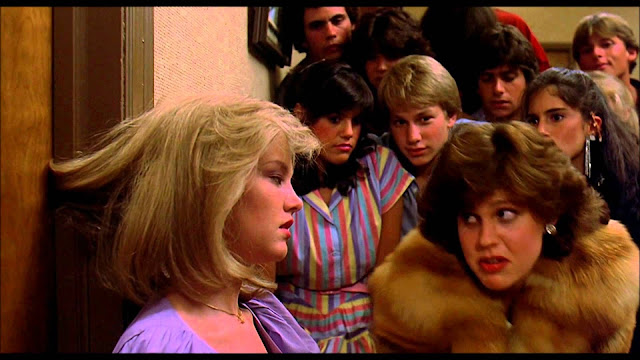 The officer who went buckwild on those black youth in McKinney, Eric Casebolt, resigned on Tuesday. His attorney, Jane Bishkin, said on Wednesday that Casebolt "allowed his emotions to get the better of him," and "he believed that those who fled were possible suspects."

Not teenagers—Remember, black children are seen as older, and less innocent. So they are suspects.

A petition has been launched on Color of Change asking for Casebolt to be charged. "Officer Casebolt has resigned, but it's not enough," according to the petition. "Any police officer who treats another human being, let alone children, in such an abusive, life-threatening manner must be held accountable. The Black teens at the party were singled out for abuse and none of the white bystanders experienced any police aggression. It's gravely unjust."

But our American problem is not just about Casebolt.

Karen Fitzgibbons, a fourth grade teacher at Bennet Elementary in Wolforth, Texas left a now-deleted comment on an ABC News story on Facebook where she suggested segregating "the blacks" who are the ones causing all the problems. 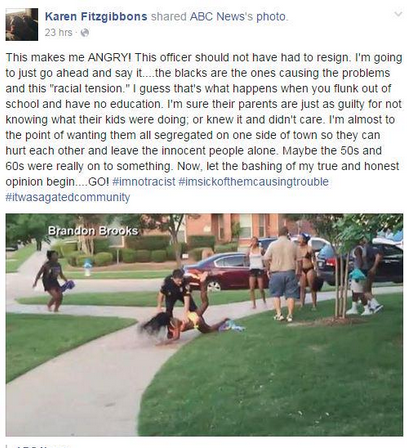 This is the worldview through which she's teaching her students. However, “It was not an educational post; it was a personal experience post,” Fitzgibbons told the Lubbock Avalanche-Journal.  She also said she “apologized to the appropriate people.”

Are those people her students? Their families? Or does she assume that because Lubbock County is nearly three-fourths white, that her students and their parents share her views. 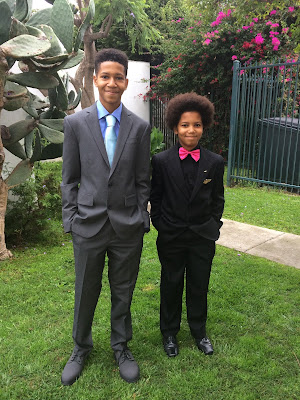 Meanwhile, my sons—and their male and female peers with black and brown skin—are suspects.

It doesn't matter if they're wearing suits or if their pants are sagging.

It doesn't matter if they have a sparkle in their eyes, or if they're behaving like moody and sullen adolescents.

It doesn't matter if they live in the heart of the city or in the leafy-green suburbs.

It doesn't matter if they listen to Drake or if they're snapping up Nirvana vinyl at the record store.

As Frederick Douglass so brilliantly put it, "The white man's happiness cannot be purchased by the black man's misery."

The tip of my black misery is that it's summer. Should I worry that when my boys take the bus down to their favorite comic store in Los Angeles, something will happen because they're perceived as dangerous? When they go to the park? To the local swimming pool? When they just breathe?

This is America—I am a fool if I don't.
Email Post
Labels: black children parenting race

L."Wren" Vandever said…
What a stunningly truthful post. Like thousands of others, I watched what Casebolt did to that girl and her friends and was (still am) appalled at his mindless violence against peaceful teenagers. Of course, it's become increasingly clear over the last several years that serious, widespread discrimination is still alive and well in America, but it makes me so sad. I'm so sorry that your kids are in real, daily danger, and that you live in fear for their lives. It shouldn't be like this in America in 2015. But it is, and it must change, somehow.

Unknown said…
Thank you for such an eloquent, poignant post. More and more of us must speak out the truth until it drowns out the racist bleating of those who would deny to others that they so much want for themselves.