That White Man Is Not Your Daddy 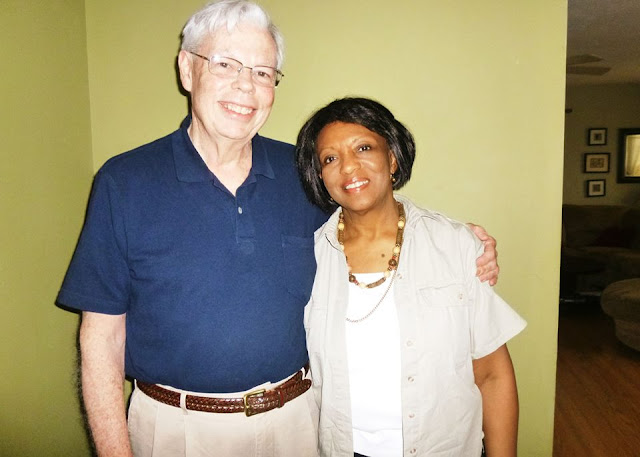 "I like your skin. You have such nice skin. What do you use on it? Do you use this stuff?"

I talk to strangers—sometimes they're good Samaritans and will pay for your groceries when you've forgotten your wallet—so when the woman standing next to me at the Origins display in Macy's last Sunday began bombarding me with skin care questions, I answered. Maybe I was even flattered by her curiosity. It's been two months since I finished treatment for breast cancer and most of the time I still feel like death on a plate. My skin looks good? Really??? Pray tell me more, lady.
She asked how old I am. I briefly considered adding 10 years to my age, just to mess with her. But I was honest... which led to her asking more nosy questions.

"What plastic surgery have you had done?" she asked.

I could hear the accent in her voice. Such a direct question isn't rude in some cultures so I wasn't annoyed. None, I answered with a smile. "Where do you get your botox done?" Uh, I've never had botox. Needles kinda freak me out.
Instead, I told her about my love of Castile soap, coconut oil, baking soda, Fuller's earth, and apple cider vinegar. And, of course, I never leave the house without wearing sunblock AND concealer to cover up my under-eye dark circles. Otherwise I look like I just came out of a grave.

I pulled out my phone and looked up the brands I buy so that she could see what the packaging looks like. I told her where I purchase everything—yes, the apple cider vinegar that's available at the grocery store...yes, just mix it with the fuller's earth and put it on your skin. And then she wanted to know, "Does your mother look young, too?"

My mom puts the "B" in "Banger" so asking me this question is like dangling bacon in front of a stray dog. (I'm the excited stray dog, not the bacon, mmkay?)

"My mom is gorgeous—and everyone in her family looks really young," I said as I happily scrolled through the photos on my phone to provide photographic evidence. And then I found the image at the top of this post of my mom and dad.

"See, here is my mom," I said, angling my phone so the woman could see the picture. "Doesn't she look amazing?

The woman's brow crinkled with confusion as she looked at the picture. "Who is this man? Is he her boyfriend?"
"No, that's my dad," I replied. "They've been married for nearly 50 years."

Her lips twisted as she examined the picture. "I do not believe it," she said.
"I know, right? She looks soooo young but they've been married for, like, FOR-EVAH..."

"That is not your daddy," she interrupted.

1) Liz, you REALLY need to stop talking to strangers.
2. Where the hell is the damn saleswoman?
3) Am I about to have an argument in Macy's over whether my dad is actually my father?

And then she doubled down on her doubts.

"No, that is not your father," she continued with a dismissive shrug of her shoulders. "That is a white man."

THAT IS A WHITE MAN? What in the ever-loving hell???

"Yes, I know it's a white man—because my dad is white," I said. I felt like I was explaining to a small child how babies are made: You choose your words carefully and you speak slowly so you don't scare them.

"Yes, he is a white man, and yes, he is married to my mother, and I am their daughter," I said.

Ah, there was the saleswoman. She sauntered over to us, her face bright and full of sunshine. "Are you ladies finding everything alright?"

"I think this woman needs some assistance," I said. "She's looking for some skin care products, and I told her that she should buy EVERYTHING from Origins because it will make her look gorgeous."

The saleswoman looked like she was seeing dollar signs, so I decided to make my exit. "Good luck!" I said as I walked away.

In the days since then, I've laughed about this incident with my co-workers and friends. I told it to my mom during a phone call. She thought it was hilarious, especially the whole "That is a white man!" part.

However, I am just so fascinated by how quickly the conversation shifted from a discussion about my skin care regimen to the regimentation of my family. She was happy to talk to me about all my beauty secrets UNTIL she was confronted with the photographic evidence that a white man got married to a black woman and had a kid with her.

Then there's the inherent sense of superiority—if she said that my dad was not my dad, then there was no way she could be wrong.

But I can't be angry with that woman, though. After all, isn't this so often the way things are in America?

Beccx said…
I would not have been as nice to her as you were. I come from a mixed background too and when people ask about my ethnicity and I tell them I'm black, they get so disappointed.
7:27 PM, June 05, 2015

Anonymous said…
I think my daughter gets similar treatment. Some people are shocked when they see her asian mom. Sometimes the three of us would be together somewhere in public and people would just like walk or stand between her mom and me if we weren't holding hands.
12:00 AM, June 06, 2015

Lisa Johnson said…
My head is still spinning. I do not understand her. You are far more gracious than most people would have been.
7:13 AM, June 06, 2015