When Your Shopping Cart Turns Over, Is There Anyone Around to Help? 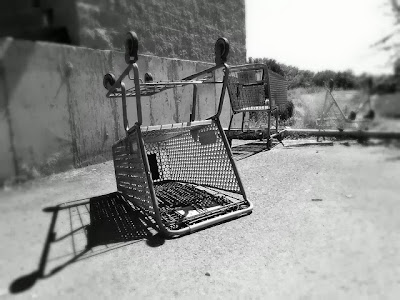 "You done fucked up big time."

My windows were shut on Sunday morning but a woman's voice came through the glass, loud and clear. I looked out and saw her ambling up the street pushing a shopping cart filled with odds and ends—blankets, scraps of clothing, bottles and cans retrieved from blue recycle bins. I glanced up and down the street to see who was bothering her, but there was no one else out walking. She was yelling at someone no one else could see. And she was angry. Very angry.

She gestured wildly as she shouted, and in the process, flipped over her cart.

"Look what you did to my cart, you motherfucker," she screamed at the invisible entity.

Cans and bottles rolled out of the cart and onto the concrete, and she began darting about to retrieve them. She'd get a couple and then turn and shuffle back to the cart, stuffing them back inside, and then putting blankets and clothing over them so they couldn't roll out again. Traffic was fairly light and the few cars on the road swerved to avoid her, honking their horns.

"Get outta the goddamn street," yelled one driver. In between picking up the last of the cans, she yelled back and shook her fist at his car. And then she began to try to put the shopping cart upright. She leaned over it, trying to heave it back onto its wheels, but she couldn't get it off the ground. Given the weight of her belongings, she simply wasn't strong enough.

Take a close look under the 101 Freeway where it crosses over Melrose Avenue and you'll see figures huddled in the shadows of the steep embankments where the ground meets the road. Inches above, oblivious drivers zoom to and fro.

Sleeping on the Venice Beach Boardwalk—and in countless doorways and covered bus benches across Los Angeles—are those who tie rags around their feet, stuff newspapers down tattered shirts, and wrap themselves in blankets so they can keep warm.

Tourists come for a taste of Hollywood glamour and end up taking home fake Academy Award statuettes and an insight into just how bad our "homeless problem" really is. As for those of us who live in the City of Angels year-round, we are frequently guilty of seeing our homeless population as a dangerous nuisance. As Mel Tillekeratne, the chief organizer of the Monday Night Mission, which works with homeless folks living downtown on Skid Row recently put it,


"...most people in Los Angeles call the homeless people bums and losers. Last week I heard from a friend of mine, Quinn, that someone actually peed on him while he was sleeping on the sidewalk. People in L.A. actually believe people choose to be homeless, so they don't have to help."

The Los Angeles Times reported in June that the "number of homeless people in Los Angeles County jumped by 16% over the last two years, fueled by lingering economic devastation from the recession and rising rents and housing price." The official count put the homeless population at 58,000 individuals. If you spend any time in this city, it's easy to suspect that the actual number is much higher.

No matter what direction I head when I walk out my front door, within a quarter mile there are makeshift homeless camps made up of tents, blue tarps, and blankets tied to trees and poles. And then there are those folks who are more transient, who pile their belongings into shopping carts and push them until they're too exhausted to push anymore. Sometimes, on these pothole-filled streets and cracked sidewalks, the carts turn over. Their owners are left alone, like the woman under my window, to pick up the pieces of their lives.

As the woman outside continued to yell, one car of teenagers/young twenty-somethings with their windows rolled down stopped at the stop sign. She began screaming profanities at them, but the car didn't immediately speed off. It seemed that the driver was talking back to her. I raised my window up a little further so I could hear their exchange. Then the driver jumped out of the car. Uh-oh. I grabbed my phone, ready to call 911, worried that he was going to do something to her.

He certainly did something—just not what I expected.

This young man, decked in his black skinny jeans and a black Morrissey t-shirt, went over to her shopping cart and pulled it upright. My mouth hung open, and I think the homeless woman in the street was pretty shocked, too.

He then proceeded to walk over to her, take her by the arm, and gently lead her back to the shopping cart. Then he turned, ran back to his car, and sped off. Reunited with her belongings, the homeless woman continued to push her shopping cart up the street, no longer talking so loudly to the unseen entity that she'd been so angry with before.