Thank You, New York City, For Electing a White Man Married to a Black Woman 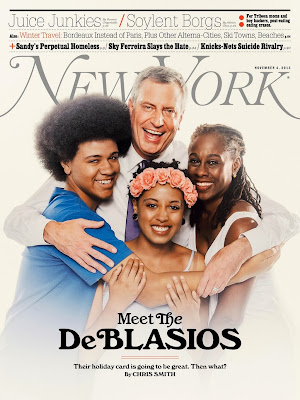 With the election of Bill de Blasio, New York City has officially ushered in the end to billionaire Mayor Michael Bloomberg's reign. Writer Sarah Jaffe said on Twitter that de Blasio had the leader of the fast food strikes with him on stage during his election night acceptance speech. "That's the difference," she tweeted.

While there's hope that through a rise in economic and social justice-driven policies de Blasio can usher in an end to New York City's shocking extremes of wealth and poverty, one look at the New York Magazine cover above let's you know that, ahem, striking workers on stage is not the only noteworthy difference.

I fully admit I get teary eyed knowing that an interracial family will be living in New York City's Gracie Mansion. Everyone who voted for de Blasio knows that his wife, Chirlane McCray, is black. Okay, okay, maybe not everyone. Maybe there were like two people out in Far Rockaway who didn't know his wife is black. But everyone else knew that this white man, the now mayor-elect of New York City, is married to a black woman from Massachusetts. And one of their kids even comes ready made for a t-shirt that says "Do Not Stop and Frisk" on the front and "Do Not Pet My Afro" on the back.

I can't think of another major city in the United States--by major I mean places like Los Angeles, Chicago, Houston, San Francisco, Washington, D.C., Atlanta, Seattle, etc.--that has ever had a white mayor married to someone black. No, you're not supposed to vote for a person solely because of his or her skin color--or the skin color of their spouse. It's a person's character--the policies they put into place, the way they refuse to bow down to the trickle down puppeteering from what Peter Buffett calls the "philanthropic colonialism" of our wealthy elite--that counts. All that is true.

But the images we see matter. I know, because these people are my parents:

I've lived and breathed the way my parents were (and often still are) treated. The rude stares, the cold shoulders, the way people ignore my mom while they're speaking to my dad--I've seen it all.

There was the time my parents were interviewed by a newspaper and someone cut out the accompanying picture, drew devil horns on my mom, and mailed it to our house. When we went to the grocery store, nine times out of 10, we'd get an uncomfortable cashier watching us as we took everything out of the same shopping cart. The cashier would mumble, "Um, uh, are you all together???" My dad would always get super formal and reply in his sternest voice, "Yes, we are." I've noticed that now he tries to pre-empt them by loudly announcing, "This is all together."

Then there are those folks who've bought into the Black Woman as Magical Sex Goddess myth. If I had a dollar for every time someone has had the nerve to tell me, "Your mom must've had that white man whipped to get him to marry her," I'd seriously be so paid. Earlier this summer when someone said that to me, I snarkily replied that my mom was in the process of making a "Sex Tips to Trap (and Keep) a White Man" video. My snark fell flat. "Is she?" the person said. "Oooh, I need to get me one of those then. I wouldn't mind a white man to boss around and pay my bills."

Or there's, "So was your dad always into black women--like a fetish kind of thing?"

And don't let them find out that my dad is a jazz musician. I can see the light bulbs of misguided understanding flicker across their face as they say, "Ohhhhh, so he's like a wigger for jazz--he got himself a chocolate sista to be legit."

Talk about being in interracial stereotype hell. And those are the nice comments.

Folks don't behave this way because my mom is fly as all get out and my dad's handsome charm slays left and right. They stare and made racist comments because she is black, he is white, and we have been trained to believe that the human version of chocolate cookies plus milk is not only wrong, it must come about due to some moral failing, weakness of the flesh, or ulterior motive. Why would you otherwise ignore America's de facto racial segregation rules? (Rule 1: Date 'em, have sex with 'em, but don't marry 'em; Rule 2: Socialize at work but don't invite them home.)

Thank God that over four decades ago my parents chose to ignore those rules. Otherwise, you wouldn't be reading this since I wouldn't exist.

Now that I'm older, when I'm home and I go grocery shopping with my dad, I get the same disapproving stares from people that I've seen my mom receive. Even though he and I look so much alike, folks stare at me like I'm his mistress. I love messing with the cashiers by giving a knowing look and purring, "Yes...we are...together."

That's not to say there's not greater acceptance of interracial couples nowadays--de Blasio's election proves that. Even the way some folks root for Olivia and Fitz to be together on "Scandal," proves that. But just as having the Obama's in the White House doesn't mean racism is over, the way interracial couples and their families are treated isn't over, either. If it was, earlier this year Americans wouldn't have brought their inner insane racist to a YouTube page with a Cheerios commercial featuring an interracial family.

Yes, we still need to work to truly eradicate racial prejudice from our hearts. It helps that over the next four years, the de Blasio family will give millions of people around the world a visual reminder that there is nothing wrong with crossing the color line. A white man who's married to a black woman being in the mayor's office of the most prominent city in the United States means a whole lot to all of us who grew up in families like theirs. I hope de Blasio lives up to his campaign promises and truly represents all people, but in the meantime, thank you, New York City, for this gift.
Email Post
Labels: Bill de Blasio interracial relationships New York City parents Politics race

Anonymous said…
As a New Yorker...I LOVE IT. I also love that his son currently attends my high school and he is from my neighborhood in Brooklyn. CHANGE IS GOOD. Bye Bye Bloomberg!

Anonymous said…
I love this. I got the warm fuzzy feeling when I saw that New York Magazine cover too and I don't come from an interracial family. Thank you for sharing! --Julee
8:39 AM, November 06, 2013

Los Angelista said…
I know you have got to be so proud and happy! The diversity of the city can once again shine through! And WOOT, his son attends your high school! Watch out now, he's got some legacy to match up to in those halls!
10:40 AM, November 06, 2013

janet ruhe-schoen said…
Thank you for this, Liz Dwyer... you're a terrific writer and you've said a whole lot and said it beautifully...

Monique of Mo Travels said…
"No, you're not supposed to vote for a person solely because of his or her skin color--or the skin color of their spouse. But the images we see matter." Yes, they do. I've been saying this about the Obamas from the beginning. No matter what POTUS does or does not accomplish during his term, a black family living in the White House is an unbelievably powerful image, as is this one of this beautiful interracial family.

Los Angelista said…
Such a powerful image, right? I hope someone somewhere is doing some research on how these things actually change black children's self esteem, etc.
10:20 AM, November 07, 2013