Blackness is being "down?" Incognito, Martin, and the Dolphins 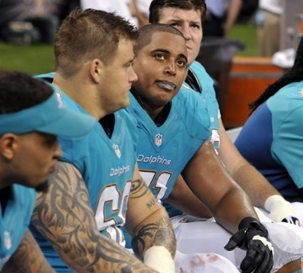 Yours truly is in the U.K. but I wish someone would say I'm less black than a white guy who talks and acts in a certain way. Pfft. In any case, this is a guest post from my dear friend and fellow Midwest-to-Southern Cailfornia transplant, Dartagnan Newman...who is awesome and has much to say on this:
Last week’s rhetoric involving the Miami Dolphins, Richie Incognito, and Jonathan Martin takes me back to when I was an elementary student in third or fourth grade. I wanted to be everyone's friend—to some degree I'm still that way today—so when I hear former and current NFL players who happen to know both Incognito and Martin say the two were actually friends, I wonder if they really were, or if that was Martin's defense mechanism.
I was a child of diminutive size, and I wasn’t a kid that could defend himself very well, so I used that very same defensive tactic. Self deprecating humor and quick wit being my shield, I could often make the bullies laugh as opposed to them chasing me for four blocks when I got off the school bus.
What was my crime that would bring on the wrath of the neighborhood ruffians? Was it my intelligence? Me being soft spoken and keeping to myself? Was it carrying a bulky musical instrument to the bus stop? Maybe it was wanting to take the 15 block walk to the downtown library to spend an entire Saturday instead of staying one block away to hang out on the neighborhood street corner. These things were not looked upon as cool to the kids in the black community. I wasn't "down"—or maybe I was "square.” I didn't speak in the same manner that a lot of the other kids in my neighborhood spoke. I was constantly accused of "talking white."
When I think of Martin as a biracial person, and what he potentially had to endure at the hands of Incognito, it reminds me of that small elementary school boy—me—who was always viewed as different. I can't imagine what it's like for a biracial person to straddle that fence every day. Martin probably wasn't "down" either. Too white for the black kids and one ounce of black was more than enough to make him an outsider with the white kids.
Martin is now seemingly getting the lion's share of blame for this incident with Incognito. The black Dolphin's players are actually defending Incognito and not Martin. They say Martin was quiet. He kept to himself, or he was soft etc., etc. In fact, the black players have gone as far as to say that Incognito is an honorary black man. I guess that gave him carte blanche to spew whatever racial and ignorant thoughts he had to Martin in voicemails and text messages?
There are ghettos, projects, and slums all over this country and in every one there will be your drug dealers and gang bangers but also in those very same neighborhoods there are potential doctors, lawyers, and politicians. Too often our young people glorify rappers and athletes—and in some communities even the neighborhood drug dealer because of his clothing or the car he drives. “Hey, I can't be Einstein,” they say, “but I can certainly sell drugs and still be okay. Look at him!” Sometimes it's cooler to go to jail than college—or at least in the hood you may have more street credibility.
I am now an adult and no longer a scared little boy. I'm neither afraid to speak my mind nor freely give my opinions. I also have a little boy of my own and I am very in tune with his demeanor when he comes home from school every day. At the slightest inkling of bullying or trouble of any kind I will attempt to put a stop to it immediately. However, I do want to teach my son the right way to deal with bullying. Maybe how I dealt with it when I was 10-years-old isn't the right away and maybe Martin leaving his Dolphin's teammates and coaches and not facing Incognito head on wasn't the right way either. But I will tell my son this: you don't need to fight, but you should try to gain the respect of people the way you think is right.
I hope Jonathan Martin can return to his teammates, that they can respect how he chose to deal with the situation, and accept him back to the fold. I also hope Richie Incognito can learn from this and that he too will be given a second chance to play the game I'm sure he loves.
Email Post