Can I Ask You a Question? How Do I Impress a Girl? 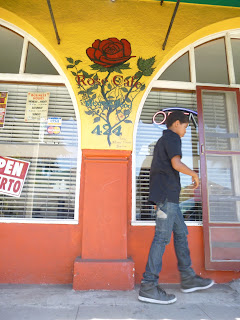 I've been mulling over our conversation ever since.

You see, after he was born and I heard the obstetrician announce, "It's a boy!"--which effectively killed my dreams of having an amazing daughter named Almitra Naomi--I determined that having a son was a pretty incredible opportunity. I could raise a son who would become a man who wouldn't dare tell a women to smile.

I want Mr. O (and my other son, Mr. T) to be these shining beacons--a new breed of men who have a deep rooted dedication to the equality of men and women and exemplify that in all areas of their lives. And so I'm always resisting the temptation to get all GIRRRLLLSSSSS? Oh Heck Naw!!!

Mr. O's going to like girls. It's what he does with that liking that matters.

And so we had a short and sweet conversation about respecting girls, recognizing her intelligence, friendship, and being real. As he put it, "So if you keep being a fake person to impress a girl, eventually she'll figure it out."

Later on, a friend mentioned that listening is a key--a good reminder that too often in our world, women are not listened to, or are only listened to in a superficial manner. What would our world look like if men truly listened to and honored women?

I also often reflect on how for black male, there is a whole other set of hypersexualized madness that is automatically foisted on my sons. Be a mack with a pimp cup. Be a baby daddy. Live for the physical, for fleeting moments of pleasure. Use and discard women. On to the next one. #YOLO. Shut off the spiritual and emotional core of who you really are.

And so I ask you, how would you answer such a question? How would you raise a son to overcome the distortion of masculinity and manhood that is so inherent in our modern world?

Sarah Auerswald said…
Having 2 sons of my own, I know this question very well!!! The answer? Good grief, I wish I had a guarantee, not just an answer. I want to raise boys who turn into Men I am as proud of as I am right now while they're still my babies. When they're "issues" are about school and if they're getting their chores done. I want to be proud of how they choose to earn a living and how they interact with people, not just with girls and women, which will hopefully be much, much later, since they are still so young in my eyes. And I want them to be proud of themselves, too, but not in that bravado way, but because they know themselves and know the difference between right and wrong. Oh, the life of a Mother to boys.
7:13 PM, September 13, 2013