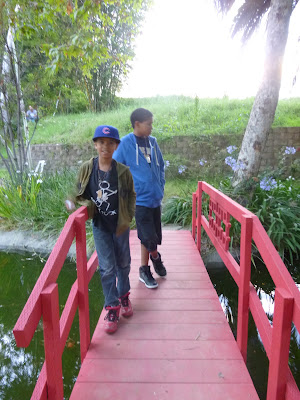 "Fair sir, do not tempt me with fruit from other trees." That's the line I overheard my 12-year-old, Mr. O, dramatically deliver last night to his 9-year-old brother, Mr. T. They were supposed to be sleeping but bringing a dramatic flair to a discussion about trading action figures was clearly WAY more exciting.

This kind of drama has peppered their conversations for the past two weeks. This is what happens after children go see a Shakespeare play.

Indeed, there's no denying the power of the arts to inspire and to heal. And while my boys have taken a more creative spin on a performance of "A Midsummer Night's Dream,"--Mr. T has decided he's Puck and Mr. O is Lysander--it also helped me heal from my did George Zimmerman really just get acquitted? shock.

You see, we went to see the play the evening after the verdict. I didn't feel like going anywhere--my eyes were crazy puffy from crying, and I was emotionally deflated. And then I remembered that the nice folks at Davidson & Choy PR had hooked me up with some tickets for myself and my sons, so as emotional and depressed as I was, I got off my ass. What got me out of the house was knowing that taking my sons to see Shakespeare was a rejection of everything the George Zimmermans of the world think of black folks. Yes, we do appreciate skilled actors performing live theatre. Yes, we can wear our hoodies to go see Shakespeare on a balmy evening--and there's nothing you can do about it.

"Balmy," because the play, which is a production of the Shakespeare Center of Los Angeles (and runs through July 28th) is being performed outside at the Japanese Garden on the Veteran's Administration property on the Westside of Los Angeles. I've only run through the VA since it's on the L.A. Marathon route. It's like mile 19 or so and I usually feel like I'm dying when I'm rolling through there. Not exactly the time to take in the scenery. But on the night of the play we enjoyed snuggling into our hoodies--it gets cool at night in Los Angeles--and exploring the koi ponds before it was time to take our seats.

The play itself is a fresh twist on Shakespeare--it tapped a 1950's vibe without the1950's-style lack of diversity in the cast. The Shakespeare Center has as its vision that the center "artfully creates professional, relevant theater that reflects the history, landscape and people of Los Angeles." No kidding, a day after the verdict, it was so nice to see Hippolyta/Titania played by a black woman, OBIE award-winning Tracy A. Leigh (she is SO gorgeous!) and see Lysander played by a Julliard-trained brotha, Desean Kevin Terry.

Since that night I've told so many people that more than anything else, being doubled over with laughter while watching Titania fall for Bottom helped remind me that there is beauty, goodness, hope in the world. It meant something to know that a portion of the ticket sales (they start at $25) goes toward supporting their veteran workforce. And seeing my sons laugh along with me, hearing them last night, still bringing that theatrical energy to their speech, reminded me that there is more in store for them than the small minded racists of the world will ever understand.
Email Post
Labels: art creativity Los Angeles Mr. O Mr. T Shakespeare veterans