Would You Eat in Dr. Phil's Dining Room With Guns on the Walls? 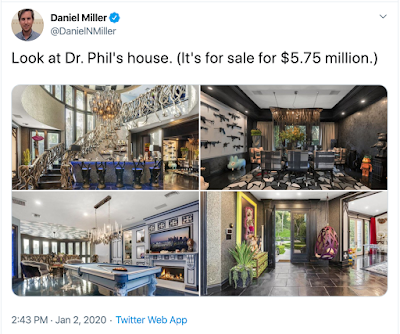 Two days, y'all. That's all it took for 2020 to go completely off the rails. And if we need to blame someone, how about blaming the Los Angeles Times because Wednesday afternoon they tweeted photos of Dr. Phil's house along with an article about it being for sale and wow. Like, ALL the wow.

As Times staff writer Jack Fleming described the home: "A dozen guns adorn the dining room wall. Bizarre figurines of bears and rabbits eye you from every living space. L.A. has gobs of outlandish estates, but Dr. Phil’s Beverly Crest home — which just hit the market for $5.75 million — is as unusual as they come."

"Unusual." Yes, that's one way to describe it. It was unusual enough to make Dr. Phil the No. 1 trending topic on Twitter. Which is where I came across the photos of this home while in a checkout line at the grocery store. I gasped aloud when I saw the snap of the guns up in the dining room, which caused the guy in front of me to ask me what I was looking at. 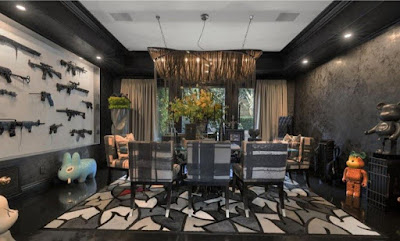 "This LA Times article says Dr. Phil's house has a dining room with guns all over the wall," I said while showing him the photo. "Would you want to eat dinner while looking at all those guns?"

The checkout guy immediately chimed in. "I would! That sounds kinda fun." The man in front of me agreed that a gun-filled living room "sounds dope!" And the dude bagging my groceries was equally enthusiastic. He also, ahem, informed me that "girls would decorate with '50 Shades of Gray' stuff."

It's hours later and I'm still not clear what exactly that "50 Shades" decor would be. Wallpaper made out of books about escaping controlling narcissists maybe? Moreso, would you eat dinner in this gun-filled dining room or nah?
Email Post
Labels: guns Los Angeles