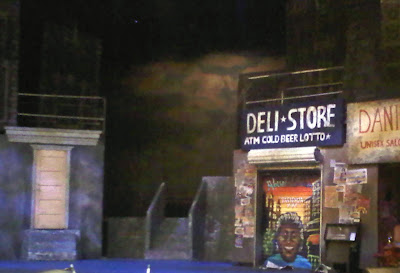 Friday night during the second act of Hollywood High School's performance of the Tony Award-winning musical "In the Heights," I found myself getting tears in my eyes.

Sure, I cried because the show was that good. In those parts of the musical where the main characters, Usnavi, Vanessa, Benny, and Nina, were going through major struggles, the performers got me feeling all emotional like a good performance should. They transported me and my sons to Washington Heights and made me feel what it's like to be a part of the Upper Manhattan neighborbood. Yes, the diverse cast of students may be young but they're incredibly talented--true triple threats with acting, dancing, and singing chops that beat anyone you've seen on American Idol or The Voice and rival pretty much any pop star out there.

At a time when we see so much negative news about schools, and when too many students never get the chance to develop their talents, how refreshing it is to see sets like the one in the above picture designed by students. Yes, TEENAGERS designed that set. No, there was no multiple choice standardized test question assessing their mastery of building a staircase or making a fake bodega door. THANK GOD!

I cried because it was so very refreshing seeing pure joy radiating from the faces of students! We don't see that on most student's faces. And who says students nowadays lack passion? These kids...the hours of practice they must've put in to get this show down in this way blows my mind.

No, I'm not exaggerating about how good it is. This is not your kid's holiday show or spring concert or whatever you're used to seeing. This is a production that's on the level of anything you'll see in a major theater. And I won't be surprised to see some of these kids--particularly the ones playing Usnavi and Vanessa--either on Broadway or in the Billboard music charts one day soon.


But don't take my word for it. If you're in LA, go check it out yourself. There are several performances over the next week: 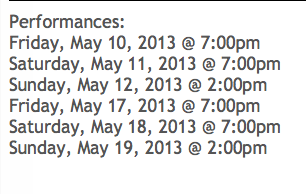 Tickets are only $20 for adults and $10 for students. You can buy them here.

Marsha Takeda-Morrison said…
Thank you, Liz, for coming to see the show and seeing what these kids have to offer! And yes – it feels good to show everyone the positive side of what teens are doing in school!
3:10 PM, May 18, 2013

Liz Dwyer said…
Marsha,
I'm SO glad we came and glad to write about it. Folks need to know how amazing those students are. We need to believe in them and in public schools!
4:13 PM, May 19, 2013