When I lived in New York, I was a regular at the Met. In Chicago, the Art Institute sometimes felt like a second home. But here in Los Angeles, the city that's been my heart for almost nine years, until Friday, I'd never been to LACMA, the Los Angeles County Museum of Art.

I initially went to see Dan Flavin's fluorescent light exhibit. But once I got to LACMA and started walking around, I realized that it's been a long time since I saw a picture I can't stop thinking about, something that just connects to my soul. 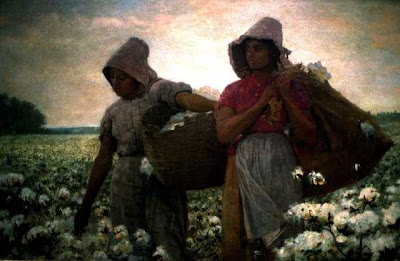 This 1876 painting, The Cotton Pickers by Winslow Homer, absolutely captivated me. These two women have a humanity, a nobility to them. There is a mystery in their eyes. I've looked at this picture non-stop over the past two days and I'm still wondering, are they happy? What are they thinking about? Are they imagining what could have been or what could still be?

That sort of complexity is often missing in so many of the mainstream images we see of black women today. This is no asexual, fat and happy mammy. It's not a caricature of a strong black woman. It's not a video ho at the beck and call of a rapper who discards her once she shakes her stuff for the camera and gives up her goodies. And thank goodness, it's not Beyonce with her layers of blond hair weave.

I started to wonder, who is this artist that depicted two black women in such a beautiful fashion over 130 years ago? An online search reveals that Homer is from Boston and best known for his landscape watercolors. I find it quite interesting that I read the first ten sites that popped up on Google, and they all neglect to mention how this painting came into being. I had to spend a half hour digging around on the Internet to find out that Homer spent some time in the Reconstruction-era South, painting, among other things, realistic images of black people. Why were the initial biographies I read skipping over that era of Homer's life? All of a sudden, ten years pass and he's on the coast of England painting waves crashing against a craggy shore. Hmm...why the gap in this man's history?

Well, just as I know racism plays a role in the current imagery we see of black women, I wonder how racism plays a role in which pieces of Homer's art are written about. It's sad to think that this painting, and the others he did of black people, might be seen as less beautiful, less worthy of being written about, precisely because they depict black people. If that's the case, it's unfortunate to think that other folks that might be as affected as I was by this picture may never even know that it exists.

Of course, I could be wrong. Maybe race doesn't play into this at all. Maybe Homer's landscapes are simply the equivalent of the Mona Lisa. I just wish I lived in a world where I didn't have to wonder.
Email Post
Labels: art black women LACMA racism Winston Homer

Jameil said…
john biggers also does some bangin work. "the banjo player" is one of my faves. hampton university's museum on campus is one of the oldest af-am museums in the country. i was a regular. i loved the ever-changing exhibits. pittsburgh has TONS of museums and i haven't been to one. i researched a million when i first moved here and haven't followed through. look who's being an inspiration! thanks liz.
11:10 AM, July 22, 2007

Ms Angela said…
I have to admit to being a bit baffled by the art world--I sometime stare at paintings, sculptures and other mediums and wonder what I'm supposed to be seeing or feeling. Of course, the answer is whatever I want, but then I listen to the comments others make about the works and I realize that perhaps I lack a certain sensitivity that would enable me to fully appreciate the experience. For that reason, I've stayed away from galleries and museums.

Now I wish I hadn't. This painting has also captured my heart, and made me wonder. I've often thought about what my ancestors might have felt or thought during slavery. Did they dream of freedom, or did they push the thought aside for fear that it might drive them insane? Did they just concentrate on picking that one row of cotton, then move on to the next, thinking no further than the end of the day when they rest and possibly eat something? I guess I'll never know, but this painting has caused me to re-visit these questions. Isn't that what art is supposed to do? Cause us to wonder and reflect about humanity? Maybe I will have to spend some time at the Crocker Art Museum here in Sacramento to find the answer. Thanks for this post, Liz!
11:47 AM, July 22, 2007

Liz Dwyer said…
Jameil,
That's so great that you were able to access Hampton's collection on such a regular basis. I'm sure it gives you a sense of place, a sense of pride that those of us who haven't seen all those pictures may not necessarily know we're missing.

It was completely by chance that I saw The Cotton Pickers the other day. LACMA had a collection of Dan Flavin's sketches and paintings on the second floor so I went up to see them. Then I just kept walking around and wandered into an American decorative arts wing. My mom creates that kind of work so I decided to check it out. And that's when I came across the painting.

More and more I believe there are no accidents in life so I think I was somehow meant to see this painting. I hope you're able to connect with some art as well in Pittsburgh...and then you'll write some more stuff on your blog to inspire us all! ;)

Angela,
I'm sure you don't lack an appreciative sensitivity at all. The questions you ask about the two women in this painting are similar to mine. 1876, when this was painted, was only 11 years post-Civil War. I wonder whose land they're picking cotton on and how (or if) they feel their circumstances have changed for the better now that they're free.

The fact that we wonder all this is a sign that Winslow Homer was able to capture an essence of the soul in his paintings. You don't have to be an expert to sense those things. Also, I think some people try to be the gatekeepers to art and try to make it seem more complex than it actually is, like you've got to have a PhD in art history in order to be able to fully appreciate what's what. I always like it when we can hear the artist's own words on what was meant by the work. Everything else is just speculation. So go have fun at your local museum! :)
6:55 PM, July 22, 2007

Dena said…
i believe that art is suppose to inspire and provoke. what a great way to learn about and understand our history's. i just love the questions you asked about these two women. the answers might not ever be clear to us, but the discussions are endless :-)
10:45 AM, July 23, 2007

Tafari said…
Thx for this piece! I googled "The Cotton Pickers by Winslow Homer" found it very striking. I wish I could see a larger version to asked the same questions and maybe a few more.

Liz Dwyer said…
DJBA,
Definitely visit because it's well worth it...and you can either do the La Brea Tar Pits or Petersen Automotive Museums on the same day since they're right next door.

Dena,
Exactly. Art should inspire and provoke. You make me think about how is it that sometimes folks can be moved to create things that are repulsive, simply for shock value. It may provoke and inspire a reaction but is that reaction really putting a positive energy into the world? Interesting to think about...and I'm still wondering about these two beautiful women in the painting.

Bygbaby,
See, yet another reason for you and your honey to make LA your next anniversary destination. That way you can see this picture live and in person.
3:19 AM, July 24, 2007

Ian Lidster said…
I love the work of Winslow Homer, and thanks for mentioning it. And also, considering the time in which he was painting, realistic, honest and sympathetic depictions of black Americans was virtually unheard of. The derelict sailor on the ravaged schooner in Gulf Stream is of course black as well.
I like your blog very much and will visit again. I would like to add your name to my list, if I might.Thank you for your comments on dialggue difficulties. Made me feel like I wasn't alone.
Cheers,
Ian
4:44 PM, July 24, 2007

Liz Dwyer said…
Ian,
I am infinitely fascinated by how Homer was able to see the humanity of black folks and depict them with such dignity and normalcy. It makes me wonder if he grew up in an Abolitionist household or something like that, because you're right, such depictions were unheard of.

heartinsanfrancisco said…
I have never seen this painting. I googled it and it's so beautiful. The women look so real, and it's easy to imagine them as members of their families, working together and perhaps keeping each other's spirits up during the day as office workers do in our society.

And then when you remember the probable reality of their lives, their dignity and natural elegance is really breathtaking.

Thank you for turning me onto this wonderful work of art. I was only familiar with Homer's better-known works.
7:10 PM, July 26, 2007

Liz Dwyer said…
Heart,
Ten years later I'm just seeing your comment! I often think about the reality that women like these must have lived and I just admire that spirit that kept them going. I definitely think that spirit is captured in this picture.
10:20 PM, July 29, 2007