Clearly, The State of California is NOT Superstitious

This state is going to hell in a handbasket.

You need some proof? Who else holds their primary election on 6/6/06? Yes, even though this state is 24% Catholic, tomorrow, the day of the mark of the beast, we are holding primary elections.

I mean, I know I live in Los Angeles, home of Hollywood, various garment district sweatshops and the San Fernando Valley, generator of the world's supply of pornograpy. But do we have to advertise to the world that instead of being the City of Angels, we're more like the city of...hmm, something else?

California partisan politics is the cesspool of all cesspools. And tomorrow, we are all supposed to band together to defeat the antichrist, Arnold Schwarzenegger. Although this state hated our former governer so much that we held a special election to get rid of him and elect a bodybuilding, Hummer-driving, Head of State, it didn't take Arnold too long to become the devil.

Now, we're supposed to begin the process of dethroning the horned king by either voting for Phil Angelides or Steve Westly in the primary. One of these two clowns will face off against Arnold in November. Who knows what they really stand for? Westly seems to be trying to paint himself as the choice of smart, young progressives (is this becoming a code phrase for young white people?) and Angelides had the corny commercial with his two daughters saying, "Vote for our dad because he's awesome!" I don't know about you, but this is not inspiring me to believe that real change will take place for the poorest residents of this state.

Then there's the race between Kevin de Leon and Christine Chavez. Not really sure what exactly they are running for, which is odd since I've gotten a gazillion phone calls that usually go something like this,

"Hi, this is Bret Michaels calling. You may remember me from my days of singing in the rock group Poison. Well, the real poison is Christine Chavez. Join me and Mayor Antonio Villaraigose in voting for Kevin de Leon on Tuesday, June 6th!"

At the same time, according to the THOUSANDS of pieces of advertising that have deluged my mailbox, I'm supposed to vote for Christine because her grandfather, Cesar Chavez, was a good man and she'll fight for the rights of poor people like he did. 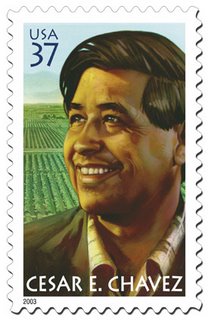 Today I got a copy of the Western Union Telegram that Dr. Martin Luther King sent her grandpa. It's inspiring to read it, but it doesn't tell me anything about Christine.

Well...maybe that's not quite true: It tells me she's not shy about riding on the coattails of a famous relative, but why shouldn't she? Isn't that the American way? I mean, there are tons of people in this so-called meritocracy, who have been hired because of who their daddy or granddaddy is/was. Are you one of those people? I know I'm not, but I sometimes wish I was when I see the hook-ups folks get!

Maybe the real issue is that we have seen so many horrific things happen in the past few years, Katrina, 9/11, and on and on that we don't need to scare ourselves with crappy remakes of The Omen. But, if we want to remind ourselves of the supernatural things we should worry about, we can go vote and then trek to the multiplex to see the horrible Omen remake that's coming out.